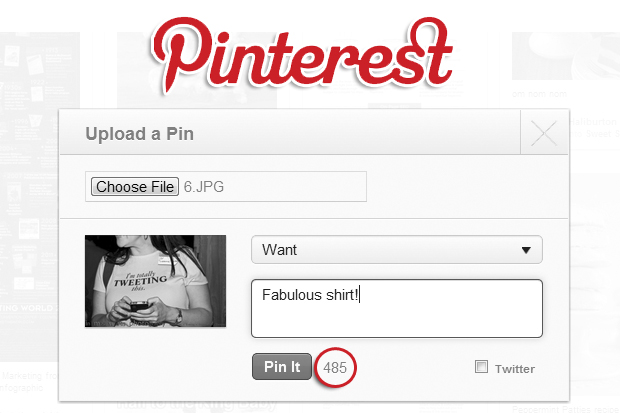 For months, AGBeat has led the conversation about Pinterest, particularly in how it can be improved, with 30 suggestions made early this year, followed by 12 more suggestions of features and tweaks the company could make to the visual bookmarking service to insure their longevity.

Because of our suggesting the site can be used for business, much of our following is independent business professionals, so our complaint about long captions on pins was thought to be a unique complaint, but Pinterest agreed with our assertion that they should be shortened, as people were posting entire blog posts as a caption, or extremely long captions that simply destroyed the aesthetic of the visual bookmarks.

This week, you may have noticed a character counter at the end of your captions as you type them out, which Pinterest has limited to 500 characters.

The character limit is aimed at curtailing a practice by some users to cut and paste entire blog posts or articles into the caption of an image. The practice was particularly evident in recipes, Silbermann told Davis, noting that the intent of the site was aimed at having people link back to the original content.

Josh Davis at LLSocial notes, “As new people have been joining Pinterest, some of them haven’t quite understood the site, or at least tried to use it in their own unique way. Some pinners were copying the text of blog posts into the pin captions. Since Pinterest previously didn’t have a character limit, these pins could go on for pages and pages. Ben Silbermann told me that recipes were particularly problematic and that posting full recipes didn’t reflect the intent of Pinterest which is to have users go to the original source of the image. Ben indicated they didn’t want to be as character restrictive as Twitter, but they did want to find the right balance.”

The character limit of 500 is well short of Facebook yet longer than Twitter and so far appears to us to be a fair compromise that allows enough space for a full description, but does not upset the flow of the site.