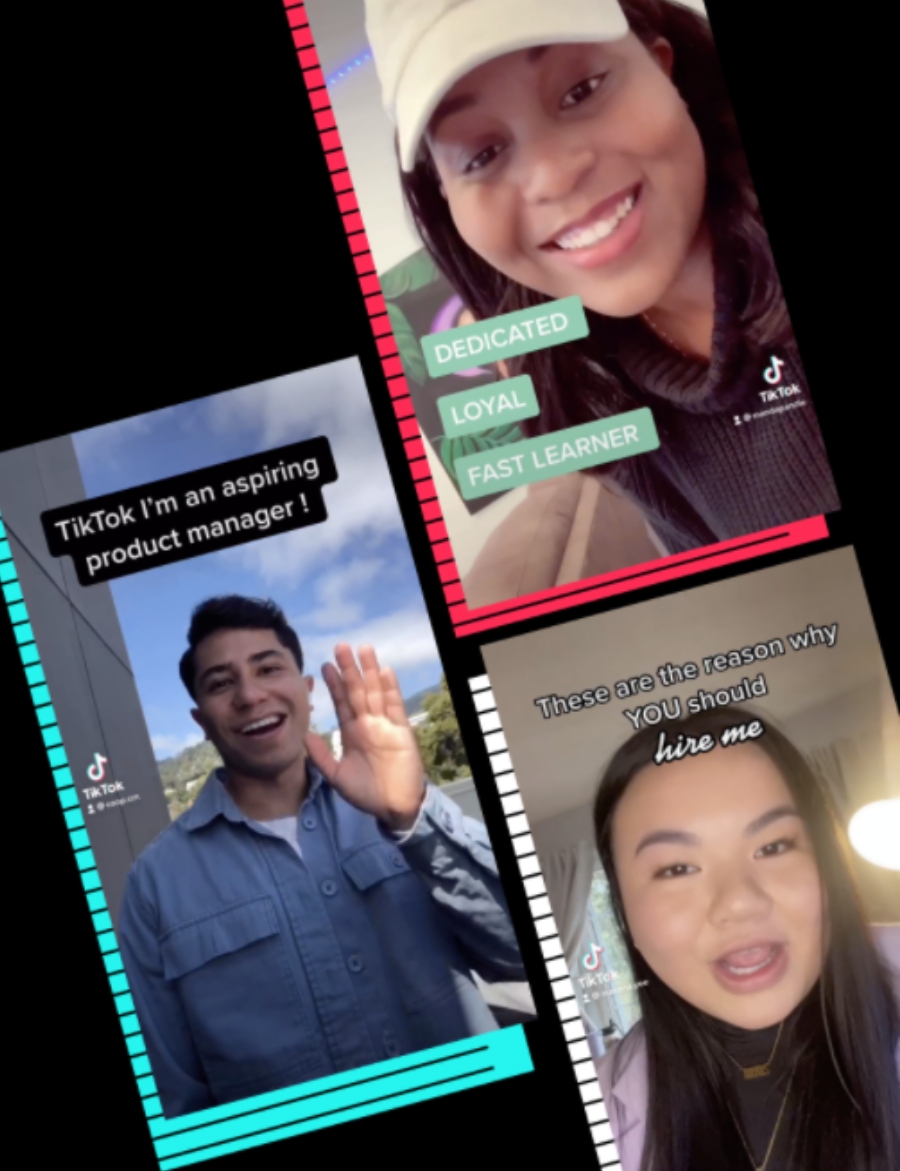 Gen Z and Millennials are no doubt the heaviest users of social media, and perhaps the internet in general. But it’s no longer just about catching up with friends and family, posting memes, and hailing yourself as hashtag king – they are using it to get jobs in creative ways.

Kahlil Greene was a student at Yale University hell-bent on educating others about African American social movements and culture. Known as “The Gen Z Historian” on Instagram, TikTok, and LinkedIn, he got to posting about the lesser-known facts and stories of history, amounting to 1.3 million views very quickly, catching the attention of employers. Now with over 500,000 followers across all major platforms, Greene is heading to work in consulting focusing on public education.

“I think that’s the thing that people don’t realize that social media is everywhere, and it’s congruent with every lifestyle you want,” says Greene.

Another TikToker, Emily Zugay, has over 2 million followers on the platform from hilariously redesigning brand logos. Her personality of shooting down brand choices with such a dry delivery is sure to make you giggle. She’s appeared on Ellen, and many brands changed their logos to her suggestions, including McDonald’s, the NFL, Tinder, Doritos, and Nascar. Just announced, Panera Bread is realizing limited holiday cups by Emily Zugay, taking a stab at Starbucks who typically creates the mad rush for holiday cups. Though she hasn’t publicly spoken about taking on a new role due to her wacky design endeavors, she has been approached for many partnership collaborations and markets herself as a content creator on the platform in order to rack in the dough.

Having the perfect one-page resume and perhaps, an inkling of personalization in the cover letter (which no one enjoys writing and barely anyone reads), is no longer the secret to landing jobs. 92% of companies use social media to hire.

“Creating a personal brand doesn’t have to be scary, hard, or time-consuming. You just have to be yourself. Consistent posts, a few follows and some direct messaging can go a long way to open doors.”

TikTok launched a pilot program of applying to the short-form video powerhouse by well, making a TikTok on the platform. Within 48 hours, 800 videos were submitted with #TikTokResumes in their captions. Expanding from internal hiring to external hiring, the program allowed job seekers to apply with their videos to Chipotle, Target, Shopify, and more.

Want to get in on the action but don’t know where to start? Unfortunately, the TikTok submissions have now closed, but you can always follow these tips to start getting creative for your next career move: Embrace the tools on the platform, do your research about the company you’re applying to, make connections on the platform and within the company, show off achievements as you would in a typical resume, and be yourself!

For more cool resume ideas, check out this article on the most creative techie resumes.

Reactions to Twitter Blue from real subscribers, p.s. its not worth it

(SOCIAL MEDIA) Instagram is allowing users to choose how their home feed appears so they can tailor their own experience… and chronological is back!

Break out the bottle of champagne, because they are bringing back the chronological order in Instagram!

About time, right? Well, that’s not all. Per Protocol, Instagram has announced that they are rolling out three feed options in the first half of 2022. What?! Yes, you read that right.

Per Protocol, recent legal allegations have been made that Instagram and Facebook have been prioritizing content viewed as harmful in the algorithm and specifically in Instagram. Instagram is widely believed to be harmful to teens. Per the American Psychological Association, “Studies have linked Instagram to depression, body image concerns, self-esteem issues, social anxiety, and other problems”.  They have been under scrutiny by lawmakers and in response are posing the chronological feed as a solution.

However, this won’t fix everything. Even if the algorithm isn’t prioritizing harmful posts, those posts will still exist and if that account is followed it can still be seen. The other issue with this solution is the knowledge that unless Instagram lets you choose your default feed view, they could still cause the algorithm view to be the automatic view. Facebook doesn’t allow you to make the chronological feed your default view. This means you would need to choose that view every time. This bit of friction means there will be times it is overlooked and some may not even know the functionality exists. Knowing this information about Facebook, prepares us for what’s to come with Instagram. After all, Facebook, or Meta, owns both.

While as an entrepreneur, the chronological view excites me, I know the reality of it being used is questionable. I would love to know others can see the products and services I offer instead of hoping that Instagram finds my content worthy to share in the algorithm.

As a human being with a moral conscience, I have to scream, “C’mon Instagram, you CAN do better!” We all deserve better than having a computer pick what’s shown to us. Hopefully, lawmakers will recognize this band-aid quick fix for what it truly is and continue with making real changes to benefit us all.

(SOCIAL MEDIA) Do you market your business on Facebook? You need to know that their targeting options for ads are changing and what to do about it.

The VP of Ads and Business Product Marketing at Facebook, Graham Mudd, expressed the belief that personalized ad experiences are the best, but followed up by stating:

“[W]e want to better match people’s evolving expectations of how advertisers may reach them on our platform and address feedback from civil rights experts, policymakers, and other stakeholders on the importance of preventing advertisers from abusing the targeting options we make available.”

To help soften the blow, Facebook is offering tips and examples for small businesses, non-profits, and advocacy groups to continue to reach their audiences that go beyond the broad targeting of gender and age.

Here’s the lowdown on how it will happen.

Per the Search Engine Journal, changes can be made to budget amounts or campaign names without impacting the targeting until March 17th. However, if you go to change the ad set level that will then cause changes at the audience level.

If you need to keep that particular ad to reuse, it may be best to edit the detailed targeting settings before March 17th in order to ensure you can make changes to it in the future.

I believe it was Heraclitus that declared change is constant. Knowing this, we can conclude other social platforms may follow suit and possibly adjust their targeting in the future as well.

As Facebook moves further toward Zuckerberg’s Metaverse, concerns about the efficiency with which the company addresses hate speech still remain, with employees recently estimating that only around 2% of offending materials are removed by Facebook’s AI screening tools.

According to Wall Street Journal, internal documents from Facebook show an alarming inability to detect hate speech, violent threats, depictions of graphic content, and other “sensitive” issues via their AI screening. This directly contradicts predictions made by the company in the past.

A “senior engineer” also admitted that, in addition to removing only around 2% of inappropriate material, the odds of that number reaching even a numerical majority is extremely unlikely: “Recent estimates suggest that unless there is a major change in strategy, it will be very difficult to improve this beyond 10-20% in the short-medium term.”

The reported efficacy of the AI in question would be laughable were the situation less dire. Reports ranging from AI confusing cockfights and car crashes to inaccurately identifying a car wash video as a first-person shooting are referenced in the internal documents, while far more sobering imagery–live-streamed shootings, viscerally graphic car wrecks, and open threats of violence against transgender children–went entirely unflagged.

Even the system in which the AI works is a source of doubt for employees. “When Facebook’s algorithms aren’t certain enough that content violates the rules to delete it, the platform shows that material to users less often—but the accounts that posted the material go unpunished,” reports Wall Street Journal.

AI has repeatedly been shown to struggle with bias as well. Large Language Models (LLMs)–machine-learning algorithms that inform things like search engine results and predictive text–have defaulted to racist or xenophobic rhetoric when subjected to search terms like “Muslim”, leading to ethical concerns about whether or not these tools are actually capable of resolving things like hate speech.

As a whole, Facebook employees’ doubts about the actual usefulness of AI in removing inappropriate material (and keeping underage users off of the platform) paint a grim portrait of the future of social media, especially as the Metaverse marches steadily forward in mainstream consumption.