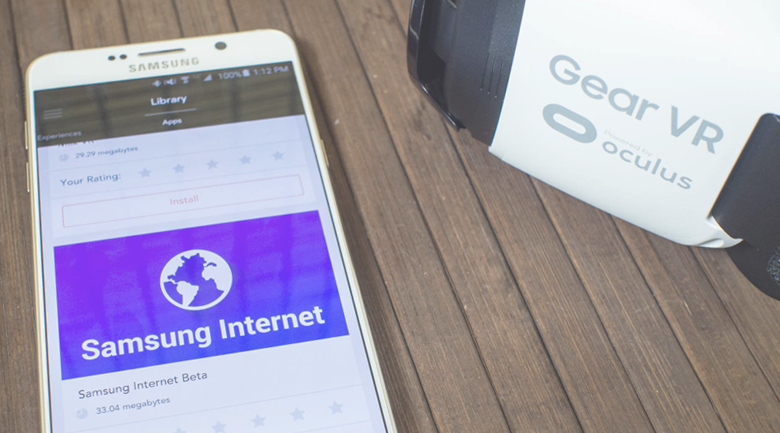 I was just writing about the fun, no make that the thrill of slipping on the magical Google cardboard 3D viewer and letting my imagination run wild. No sooner did I feel that I was standing on technology’s highest pinnacle than Samsung steps up to the plate and introduces their version of basically the same technology. Only this time, it’s not made of sturdier stuff.

Read also: Virtual reality may soon be available on your phone

There goes the neighborhood

Right out of the blocks, if you don’t have a 2015 Galaxy or Note phone you’ll be forced to stick with Google Cardboard. If you’re a bit more expansive in your tech-cessories you’re good to go as Samsung has justified it’s near $100.00 price tag with a lot of little tweaks in addition to a library of games and video apps. On one hand it’s still a mobile web browser floating in a black VR bubble.

Android Central points out that images are drawn as though you’re viewing them on a less than 1080p display, because there’s still a ton of blackness around the rectangle you’re using the browse with. But that may be the only negative thing to say about it.

The casing is noticeably lighter than the original Gear VR, the padding around the face is more comfortable, and the nose cavity is shaped to support more people without pressing awkwardly.

The opening is also wide enough to allow for just about every kind of eyeglasses to be worn while using the headset, which is way cool. Perhaps more importantly, nothing about the behavior of the touch pad has changed, just the shape of the plastic. You can swipe up from the left cavity, tap to select from anywhere on the pad, and the headset will act the same way it always has. It’s a nice set of guide grooves for folks that need them, which is the point. Once you’ve adjusted to the setup, navigating the Gear VR is just as easy as navigating was with the earlier model.

And that’s not all

Talk about opening up a world of possibilities: Samsung has also released a dedicated web browser for its Gear VR virtual reality headset. The app, named Samsung Internet for Android, allows users to intuitively browse the web and enjoy content in a more immersive atmosphere without having to download content on to smartphones.

Too hot to handle?

While the sky’s the limit with GVR’s possibilities, it still may have an overheating problem. Or maybe not. It depends on your point of view. The directions recommend that you don’t use GearVR for more than 20-30 minutes at a time. But that’s to give your eyes a break. Most consumer comments say that your eyes may give out right around the time the unit starts to overheat and shut itself down.

Leading the horse to water

My chief interest has less to do with how GVR can access an episode of The Walking Dead and more on how it can impact my business. I recently wrote on how 3D can increase the Wow-factor in your business or startup and I’m confident that GVR will raise the bar even higher.

In this article:samsung, Tech, virtual reality