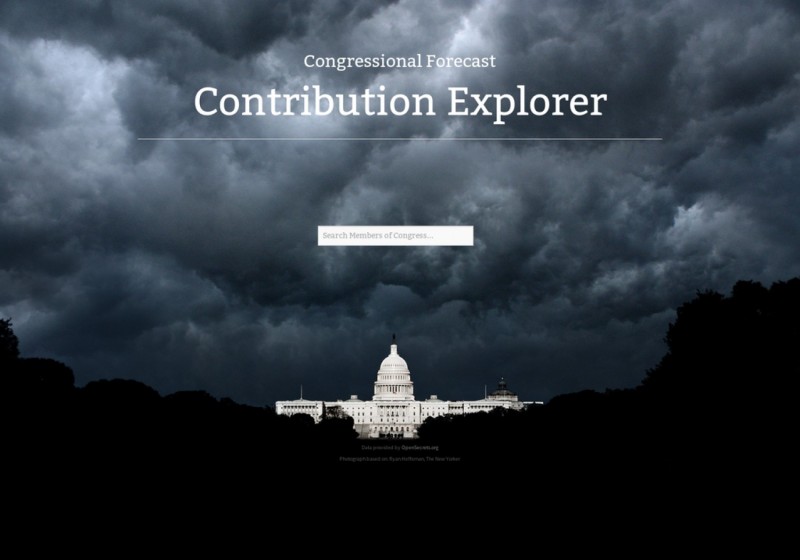 When election time rolls around, many people take to the Internet to find information about the candidates. Once a candidate is elected it can become increasingly difficult to find out who is contributing to their campaigns and influencing their decisions. One solution has recently emerged called OpenSecret.

OpenSecret uncovers where a candidate’s funds are coming from and how much they have received. While this is much faster than searching through public information for each contributor, OpenSecret displays quite a bit of information. To get a more concise overview of the same information, Contribution Explorer is the answer.

Contribution Explorer aggregates the information from OpenSecret and organizes it into digestible data. Total contributions are shown on a circle graph and when you hover on each section, you can easily see who has contributed the biggest slices of the graph, including which industry made the contribution. You can also see the grand total of contributions made, as well as, which months the greatest number of contributions were received. Having this information readily available makes keeping track of where your representatives interests lie a breeze.

Why you definitely need to know about this tool

This can be particularly useful for anyone belonging to an association that supports politicians, because you can see exactly where your company’s money is going and how much. You can also compare the number of contributions made from private citizens versus PACs (Political Action Committee)

The Contribution Explorer was set up to be the  initial step in a larger project called Congressional Forecast, which will be a suite of tools to investigate the influence of corporate money in Washington. It is inspired by the organizations OpenSecrets, Maplight, and the Sunlight Foundation, all of which will aim to debunk the nuts and bolts of our political system. As the project progresses, they hope to investigate hearings and other activities, track donation dates so you can view them across a timeline, and get an overview of which industries are contributing the most to political campaigns.

Congressional Forecast would also like to aggregate social data and voting histories somewhere along the line, so they can track relationships to money. All of these tools will service to give the general a public of how and where their representatives are receiving and spending their funds. It should also enable votes to make more informed choices, given you can view their entire contribution history.

In this article:financial, opensecrets, politics