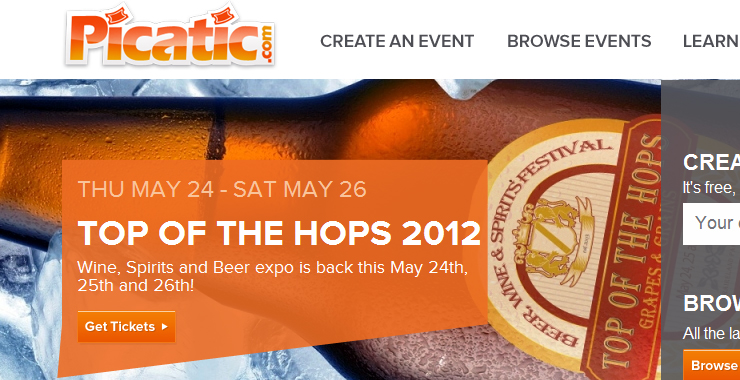 The primary pain point for any event organizer is the risk of putting on an event and assuming all of the up front costs to secure a venue, advertise, procure speaking talent, bringing on event staff, and selling tickets. It appears easy, which is why so many jump into the space, but the risks do not always meet the rewards and companies often take a loss on their events.

Picatic.com was developed by a team of event talent that first created a traditional ticketing company that has done very well, but has expanded into an innovative new vertical to solve the problem of risk for event organizers by changing how people purchase tickets for events and the platform “guarantees successful events,” the company says.

Everything from a photography class to a large concert can be served through Picatic, and like Kickstarter.com, a certain goal of revenue is set by the event organizer, and if that goal is met, they are obligated to host the event, and if not enough tickets are sold, they are not obligated to go forward with the event, which is how the company seeks to eliminate the risk, as buyers know they may or may not get their desired event, which adds to the demand, as it encourages attendees to campaign for events they want to attend.

So let’s say you wanted to host a class on how to build tables. You get a customizable event page to promote across your social networks and email, and the system allows you to collect money and manage the event in real time. So you say you want to sell 25 tickets at $20 each, and your goal is to do so by the week prior to your class. If you hit your goal, you’ve made your sales and made the event worth it, and if you fail to hit your goal, you have the option to cancel the event and not take a loss on it, thus taking the guess work out of it.

Add in a layer of airline ticket sales flair, and you have magic

Picatic CEO, Jayesh Parmar tells AGBeat that the idea is to not only de-risk events, but to empower consumers who get to vote with their dollars. Additionally, the company creates urgency through price segmentation so that early sales are incentivized and prices increase as the event nears or as a certain amount of tickets have been sold, so it functions like airline ticket sales or even concert arena tickets, with the best deals going to the early buyers.

The company hinted that their next release could be a LinkedIn for event professionals to introduce relevancy to all of the connections the industry typically keeps private, opening opportunities for event organizers, especially when going into a new market.

Parmar notes that the Kickstarter plus airline ticket sales method improves the forecasting of any event host, and their commission is comparable to any ticket sales company (averaging 2.0 to 4.0 percent on a sliding scale). The San Francisco based company has been a bootstrapped organization that recently moved from Canada to the Valley – we expect they will be funded in the 2012 calendar year, as their overhead seems to be low and revenue high.

In this article:small business, startup