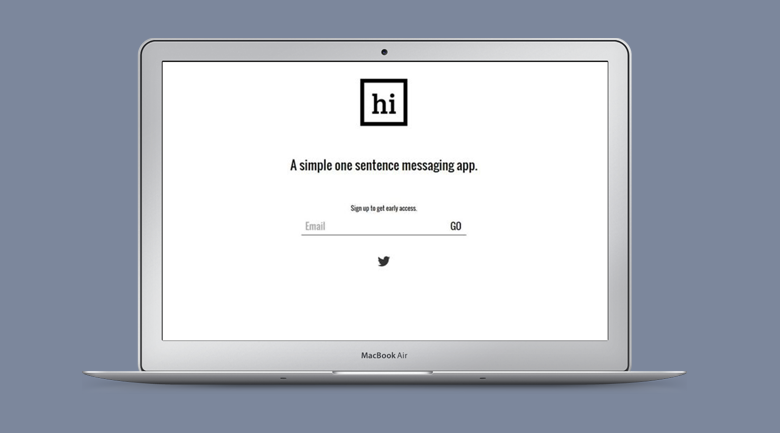 Another day, another app

It seems as if apps are multiplying exponentially. Everyone wants to get on the bandwagon. Some apps have become very specialized, similar to niche markets. In Europe and Asia, messaging apps are very prevalent, and they’re adding users faster than social media. They are a rich market popular with millennials and the younger crowd.

One problem with all of these apps for messaging is that both people communicating have to have the same app. Android’s default app is Google Hangouts, and iPhone has its own iMessages app, which only works with other Apple users. Then, there is competition in WhatsApp, Snapchat, Skype, and Kik, just to name a few of the many out there on the market.

Hiiiii.me is a new messaging niche app in beta-testing. Its claim is that it allows you to send 75-character messages to your friends. It is “a simple one sentence messaging app.” The only information on its website is an opportunity to sign up by email for early access and a Twitter feed link with four tweets over four weeks in late November and December, 2014.

While texting isn’t going to go away, messaging apps are growing. With many providers working out the kinks of their SMS systems when sending pictures and videos, messaging apps fill the void and cost less for users who pay-per-text. Messaging apps are very relevant in today’s social media industry. Facebook lost many users when they separated their messenger app from their main app. Then, they went and bought WhatsApp, but users have not seen any integration yet.

Will you find a use for Hiiiii?

As with many emerging markets, we’ll probably see many more new messaging apps as the system develops and grows. There are good reasons to have different messaging capabilities, similar to the differences between Pinterest, Facebook, and Twitter. Currently, Hiiiii.me appears to be a small fish in a big pond, but many people thought that about Facebook at one point when Myspace was so big.

An app has to add significant value to my day in order for me to keep it on my phone and use it. Personally, I don’t see the value in limiting my messages to 75 characters. Maybe Hiiiii.me will evolve and explain how that is significant. Until then, it’s fighting an uphill battle to gain users and get ahead of those already on the market.

In this article:messaging app, Tech