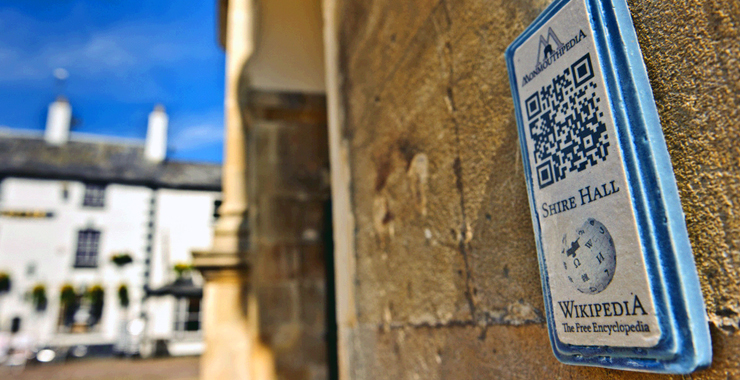 The first ever “Wikipedia Town”

The Welsh town of Monmouth has recently been dubbed the world’s first “Wikipedia Town” as part of a six month collaborative project between Wikimedia UK (Wikipedia) and the Monmouthshire County Council, providing free wi-fi to the entire town and installing over 1,000 QR codes which they are calling “QRpedia codes.”

The codes appear on every school, monument, and public building, as well as every exhibit in the local museum. When users scan the QRpedia codes with their smartphone, they are directed to Wikipedia articles, so the intention is to offer the most recent and accurate information as edited by not only community members, but Wikipedia members worldwide.

By using the Wikipedia mobile app, visitors can get a virtual tour of Monmouth and the creators describe the project as a way to add context to each building and exhibit, meanwhile raising the town’s profile and giving visitors a unique experience.

QR codes in the world

There is a great possibility that this project has given insight as to the more long-lasting way QR codes could survive despite the rise of augmented reality apps. Many question the legitimacy of QR codes and how novel they often appear, as marketers frequently use the scannable codes in ads where a memorable URL would be more efficient, but the QRpedia codes unveil a way to make them mainstream and truly useful, as remembering a series of URLs in public places is less likely than simply scanning in codes as visitors pass by.

The implications for this project are widespread, as various cities, museums, tours, and the like could model after this project and add context to any area and tell a deeper story than a simple plaque ever could. Could QR codes become synonymous with QRpedia codes when consumers see them in the wild, as more cities take on projects similar to Monmouth? Moreover, could all cities on the globe one day be Wikipedia-ized?