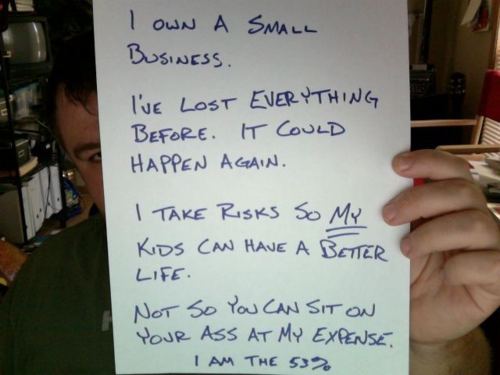 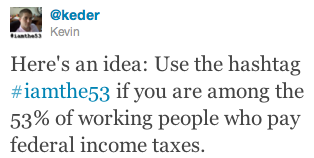 Responding to the “we are the 99%,” an opposition group has taken advantage of the same meme idea of people writing out their situation, photographing it and posting it online in protest.

The Blaze writes, “Meet The 53%. Who are they? The term 53% refers to the people who are actually paying taxes for themselves and the rest of the country.”

“The 53% is a group of responsible young people organizing across the country,” the blog notes. “However, this group is not camping out in parks around the country and demanding the entire capitalist system be destroyed. These men and women have jobs (most of them work at more than one job in order to make ends meet), but they are talking about attending the Minneapolis Occupy Wall St. protest scheduled for Friday, October 7th.”

Here’s a statement from their site:

“So, like, when you’re, like, community organizing for solidarity and stuff, it’s totally cool to have this little hashtaggy thingy when you’re on twitter, so other people, like, totally know what you’re talking about and stuff. So if you’re, like, totally gonna spread the word about being one of the 53% of people who actually, like, pay taxes in America and don’t just, like, hang out protesting stuff all day… like, here’s the hashtaggy thingy. See you at the protest! #iamthe53”

People tagging photos of themselves on Twitter with “#iamthe53” will be aggregated onto the site which appears to be part humor, part protest to the protest, and what looks to be a huge thorn in Pelosi’s side.

It is shocking that it has taken this long for the other side to stand up, remind the nation that behind every Wall Street fat cat is a politician.