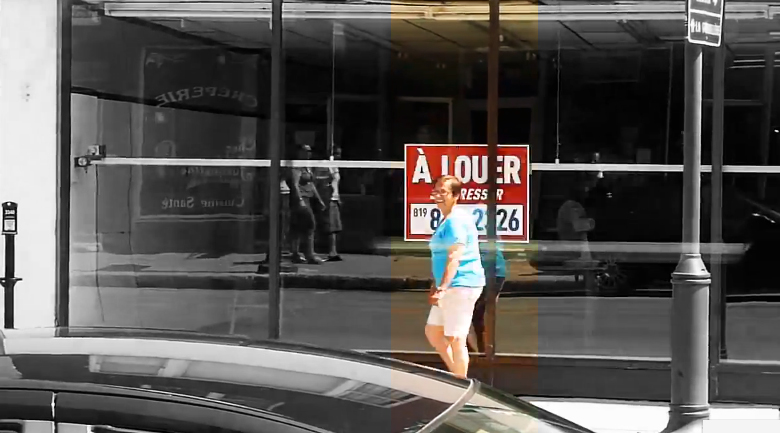 How many signs do you walk or drive past every day without really seeing? How many advertising messages do you intercept and process every hour? We’ve become inundated by marketing efforts both indoors and outdoors, in the physical world and the digital, so when someone is able to find a way to get people to interact with a traditional method of advertising, it is most definitely a win.

In Sherbrooke, Quebec, there are many abandoned storefronts, so as part of a useful art installation by Niklas Roy who calls himself an inventor of useless things, technology brought to life the age old for rent sign.

Roy said that “as nobody likes to stroll in roads with empty shop windows, I wanted to do this retail space a favour and help it to find a new tenant who can care about it.”

How Roy pulled it off

To get people to interact with the gimmick, Roy mounted a surveillance camera atop the empty building, allowing a computer to track pedestrians and move the rental sign in front of them, capturing their attention, and in many cases, making them laugh as they are stalked.

Some people even spent time trying to figure out how the mechanics worked and tried to outsmart the sign with various movements – something a traditional static sign could never do.

While this is an art installation meant to highlight the changing urban scene, we see it as more of a reminder that the simple marketing efforts that have existed for hundreds of years can be reimagined.

While we don’t suspect this will become a mainstream effort, but with Kinect and other movement-sensing technologies, interactivity is becoming mainstream.