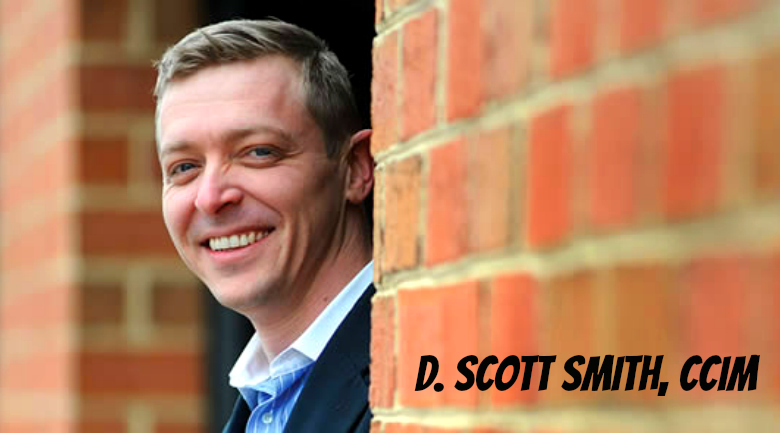 Tell us about yourself and your work.

Sure, my name is D. Scott Smith, I’m 36 years old and I focus on commercial real estate. I work in both the brokerage and in the Professor capacity. I’ve been doing real estate since 1996. Real Estate and Business is all I’ve even done and it’s probably the only thing I know how to do.

I get up anywhere from 7am-9am and spend some time with my son while I drink coffee and check emails and social sites. Then I make my way to the office, and bother my co-workers.

I make some emails up and do some research and have face to face meetings or prearranged phone calls, until around 3 or 4pm. Then, I usually take lunch and maybe grab another Starbucks. Maybe then answer some more texts and do some more market research. Then head home.

I have dinner with the family and discuss how our day went, spend some time together before putting the kid to bed, and, then head to my business center on our farm, where I do my creative thinking and reading, and make videos, and all that. I try and go to bed around 12 but sometimes it’s more like 2am.

Ok, well I was born in Southern Virginia in the Tidewater area and then moved to Gloucester, VA in 1990’s. I went to high school there. I move to Laurel, MD which is between Washington D.C. and Baltimore, MD. I did this because I have a sister in Maryland and so I had a quick commute to both cities.

Then after some jumping around, I moved to Baltimore, MD. Then when my son was born we moved from the city and now we live on a family farm in the countryside north of Baltimore. We took a barn and converted it into our home.

I was not afforded the luxury of college and I could not keep a job so I started my own company at age 19 right out of high school. I think about six months later I was homeless or I guess today it would be called having a mobile address. Anyway, so I saved up enough money to get my own place. That’s when I moved to Laurel, MD. I called up my friends from Gloucester, VA to come and work for me, so we had a revolving door operation. Some stayed, some left.

What did you do before your current career?

I played music in a bunch of punk rock bands. We went on tour, made some albums, and met a lot of people. I learned about survival and DIY through those days. Also about performing on stage and being in front of people. Then I just turned the DIY (Do It Yourself) theme into a business model.

Probably anything but grown up.

Ok wow, so this one is tough. I’ve always been the extreme type. So I had to basically have a break down and lose everything (side note: I’ve been a millionaire twice already and lost everything twice) until I was forced to learn that it’s really all about quality of life issues.

Without that, everything else is in vain. You can be rich but if your quality of life is poor so are you. So now I enjoy working from home, instead of my home being at work. To relieve stress I blow stuff up on the farm and have big parties with as many friends and family that want to come. My son is a lot like me so he makes me have that separation as well. But honestly, I’m not good at it. I have to stop myself sometimes and redirect.

I have ADD so pretty much anything. Sometimes my mind can’t shut off and I don’t sleep at all. I don’t worry about stuff that much. It’s more like, I get a thought in my head and I can’t let it go sometimes I just get up and start working on whatever y my thought is. Sometimes it’s what I have to do tomorrow, sometimes its complex leverage matrixes with tax delusion effects. Sometimes it’s just the fact that I can’t sleep is why I can’t sleep. It’s very annoying.

If you could spend one day in the life of another leader, who would it be?

There are so many and all for different reasons. I think the most common thread throughout them all is that they are all trailblazers in their own right. They stood alone and made a success of it. I don’t really care about how good you are at your job, or how many units you’ve sold. I want to know that you have heart and you have your own skin in the game and have something BIG at risk. That to me is a life worth living. Not that you can take someone else’s ideas and make some money with them. Who cares about that? I want to see your passion, what you stand for, manifest into something physical into your own creation.

I guess the ones that stand out the most, and who I would want to be, but for none other than to know what is going on (or went on) inside their mind: Walt Disney, Ron Paul, Michael Phelps, Amelia Earhart, The Beastie Boys, The Ramones, Donald Trump, Dave Ramsey, Henry Rollins, Jesus Christ, Bob Ward CCIM, Ben Cachiaras, Warren Buffett, and Jay Papasan. All of these people are brilliant and stand alone in my opinion. Now I don’t agree with all of them but I respect what they have done and how they have done it and their successes are unable to be duplicated.

What tools can you not live without?

Smart phones, Power Point Projectors, and my composition books. Also, dry erase boards and pretty much any book ever published.

What about you would most people not believe unless they knew you?

So this is going to sound kind of weird but my friends and family know this. I have big time social anxiety and would never leave the house if I could. I hate crowds and seriously become freaked out. Even out to dinner I have to be near a door or something. People and crowds just really freak me out. Some people like at conferences or something, mistake my anxieties for me having an attitude or like I’m too good to talk to people because I don’t hang around. It’s actually not that at all, I just really need to get out of there!

What inspirational quote has stuck with you the longest? Why?

Stay positive, don’t be afraid of failure, and work your ass off.

In this article:business leader, leadership, professionalism

(BUSINESS) The two terms, leadership and management, are often used interchangeably, but there are substantial differences; let's explore them.