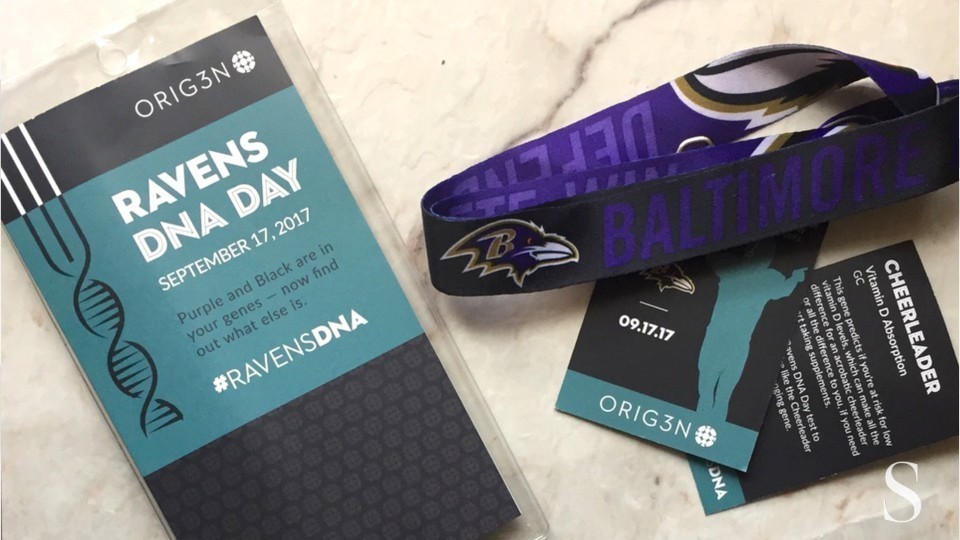 Just don’t think about it

Hey bro, can I borrow your DNA real quick? No, not for anything weird. It’s a marketing thing, totally fine.

Read also: Startup helps you optimize yourself based on your DNA

The Baltimore Ravens promotion team jumped like, a millennia into the future with their plan for DNA Day, where fans can snag free DNA test kits and have results delivered via app.

Just put it in a the box

“Find out what your DNA says about you! With Orig3n DNA tests, you can confirm things you always suspected about yourself and discover things you never knew,” the Ravens website touts. Anyone participating gets a test kit, swabs the inside of their cheek, then dumps the sample in a collection.

Not suspect at all. Don’t worry about it.

One of the genes tested is ACTN3, which, according to Orig3n, can tell if someone “is likely to have enhanced performance in power and sprint activities or is considered normal.” Colloquially known as “the sports gene,” ACTN3 is part of a binding protein gene family, and deals with skeletal muscle. Another gene tested can reportedly predict low levels of Vitamin D.

Boston-based biotech firm Orig3n will deliver results of the four-gene test via smartphone app to participating fans. According to Kevin Rochlitz, the Raven’s senior vice president of corporate sales and business development, Baltimore teamed up with Orig3n after the Raven’s sales team reached out about doing an in-game promotion. Founded in 2014, Orig3n has also collected blood samples from events and used cells from these tests to research regenerative medicine.

One of a kind

While totally bizarre, the plan is certainly innovative. “There aren’t too many places you can directly engage 70,000 people for a one-day event,” notes T.J. Brightman, president of public relations and marketing firm A. Bright Idea.

I’m certainly intrigued, and maybe even tempted to go to a sports thing if it means free science stuff that usually costs at least a few hundred dollars.

However, this kind of testing raises just a few privacy concerns. As Equifax reminded us, data breaches happen all too often. Ravens fan and attorney Bradley Shear notes that a breach of DNA info could “make you uninsurable for life insurance.”

So that’s neat. Orig3n stresses the company will use strict security standards to protect information, and that all results delivered to customers are encrypted.

How useful are these tests anyways?

John Hopkins genetic counselor Natalie Beck notes that “outside of rare single-gene genetic conditions, there is no single gene or targeted gene variants that can be tested to predict the health outcomes for any patient.” One free DNA test isn’t likely to change someone’s health outlook or provide life-changing insights.

So the Raven’s promotion is gimmicky, but maybe not completely useless.

Orig3n’s COO and founder Kate Blanchard stated that knowledge of one’s DNA is “no different than a scale to measure your weight or a cuff to measure your blood pressure.” The important thing is balancing expectations about what these DNA tests purport to do and what they actually do.

DNA Day was scheduled for the team’s Sunday game against the Brown’s, but hours before the event, officials postponed the promotion. ESPN stated Orig3n is “working to address questions from officials from the state of Maryland.” So that’s reassuring.

Would you ask your customers for their DNA, credit card info, or other sensitive materials…and then ask them to drop this information into public bins…? Yeah, maybe not the best move.

In this article:DNA, Marketing, nfl, The News