According to the Small Business Economic Trends survey from the National Federation of Independent Business (NFIB), small business optimism overall was stagnant in September, falling 0.2 points in September, compared to August, dipping to 93.9. August’s reading was revised upward 0.1 point to account for a processing error at NFIB.

Some analysts are taking the opportunity to call this stagnant data a significant decrease, and while it is sliding in light of continued uncertainty, more businesses report this month that they plan to expand capital outlays and that now is a good time to expand.

That said, although stagnant, the optimism levels remain low, with some jokingly calling it the “Small Business Pessimism Index” in recent months. Four components of the study improved for the month, but gains were destroyed by a sharp decline in optimism about the future of the economy, which NFIB notes could get worse, as this data pre-dates the government shutdown.

“The change in this month’s Index was little more than ‘statistical noise,’ but the drop in outlook for future economic conditions is evidence that many owners are keeping an eye on Washington,” said NFIB chief economist Bill Dunkelberg.

Dunkelberg notes that the poor rollout of Obamacare and the impending debt-ceiling crisis will cause a hefty decline in optimism levels in next month’s report. In addition to government uncertainty, regulations are inflicting pain according to the survey, with one in four business owners claim regulations are the top problem faced by their business now, with 18 percent citing taxes as their biggest challenge.

Fully 20 percent of business owners report they couldn’t fill open job positions in September, and the NFIB asserts that most jobs being added are and will continue to be part-time as small businesses respond to Obamacare regulations. 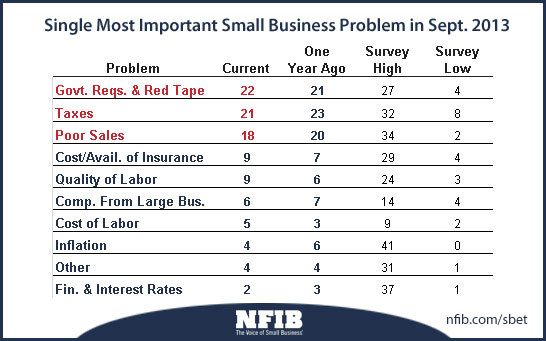