They are however, shocking. I will attempt to uncover some of these in the months to come, but for now, we’ll just start with this: the rate of return doesn’t matter. What the what?

You may have been previously programmed to believe that this was the end all, be all of investment real estate. Quite the opposite. While it is true that a higher rate of return will build your wealth faster than a lower rate of return, it is not the only factor.

Take for example an experienced investor that has a rate of return required of let’s say 15 percent. They invest in mobile home parks and have had a very successful run over the last few years. And now, let’s say we have a rookie investor, they have never even closed on an investment property of any kind before. They too are investing in mobile home parks and will be receiving the same 15 percent return.

If you are new to real estate investing, it may be worth it to first go for a lower rate of return than a higher rate of return. This is contrary to popular belief. Your first couple of deals, your first deal in a specific property type or investment strategy is going to be uncomfortable for you at first.

You are going to feel it in your stomach, your headaches, and the arguments at home over it, the figuring out of systems, the growing pains, and sometimes the heart ache. Don’t worry though, these are all common side effects of investing in real estate, they too shall pass.

So while that 15 percent is by all accounts a great rate of return, if you have to have blood, sweat, and tears to enjoy it, it may just be easier to go with a slow, steady, and lower rate of return. Because you will also have to compete to get that rate of return against that experienced investor that has already been through the learning curves and enjoys that 15 percent quite comfortably.

The number one thing in real estate investing is not the rate of return, but your risk tolerance. Make sure it’s an investment you can stomach or the return won’t matter. And that is something that all those property blasts won’t tell you. 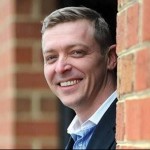 With 16 years of industry experience, earning his CCIM designation in 2007, Smith has held various leadership positions from CCIM Chapter President, CCIM Institute Regional VP, to Partner at McFalls & Smith International Development. Today, Smith is a commercial sales expert at Prudential PenFed Realty's Commercial Division, an Advisory Board Member at the University of Baltimore's Merrick School of Business, and a Professor at the Professional Development Institute. Smith has educated hundreds of REALTORS, investors, and small business owners, helping them find success through Commercial Real Estate.