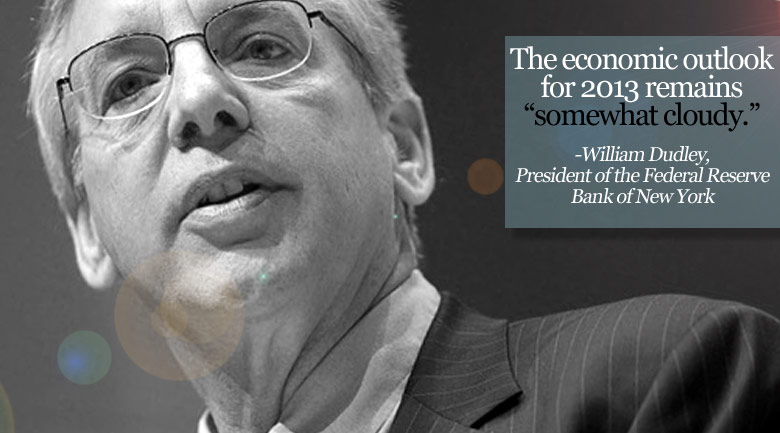 In an address to the National Association for Business Economics in New York City today, William Dudley, President of the Federal Reserve Bank of New York spoke frankly about the recent and ongoing financial crisis, opining that the Fed’s monetary policy was not as aggressive as it should have been given all of the factors of the flailing economy.

Dudley notes that despite policy being on par with historical standards, it was weak because of a limping housing sector which is traditionally the primary means of lower rates that influence the economy. With this impaired financial vehicle, Dudley says the Fed did not act aggressively enough to stimulate housing, and despite low rates, the stimulus wore off quickly as fewer consumers were induced to spend money.

Growth was further impaired by the low interest income of savers, and combined with failed housing, these factors were why he supported that third round of asset purchased adopted last month which he called a more aggressive move. Although this move is more in line with Dudley’s push for more rapid and aggressive action, he says the U.S. economic outlook for 2013 remains “somewhat cloudy,” and that should the economy pick up faster than anticipated, the Fed does not intend on responding in a “hasty manner” until it is confident that the recovery was securely established.

Despite unsure comments as to the 2013 outlook, Dudley notes the economy could bounce back more quickly if the automatic spending cuts and tax hikes at the end of the year (the fiscal cliff) are avoided, and if the Eurozone resolves their ongoing debt crisis.

In his speech, Dudley added that the Fed will be closely monitoring whether its programs create asset bubbles, or other potential consequences, and says fears of inflation because of the programs were “misplaced,” a comment some have already publicly disagreed with.

Full transcript of the speech:

In this article:Economy, federal reserve bank