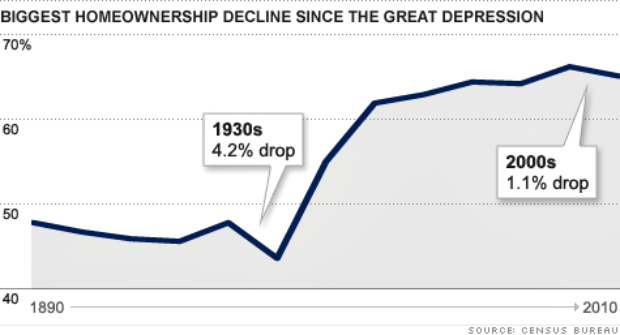 Decline in the American Dream?

We reported that we are in the middle of the most dramatic rise in multi-generational homes in modern times and according to the U.S. Census Bureau, America is also seeing the biggest drop in the homeownership since the Great Depression with the rate of homeownership falling to 65.1 percent in April 2010.

The 1.1 percent drop is the second largest drop since the Great Depression when it dipped 4.2 percent. Pew Research revealed that the hardest hit age group is aged 18 to 29 due mostly to unemployment and underemployment, fueling the migration of younger buyers losing homes to foreclosure and moving in with their parents as well as the age group not having experienced homeownership yet.

Homeownership is not a consistent portrait across the nation with the West only having a 60.5 percent homeownership rate while the Midwest is almost at 70 percent. Some speculate that the non-owners are fueling the rental market while others remember that multi-generational living is on the rise as the stigma disappears while the entire nation endures a failing economy.

Each city is different as well, with D.C. seeing homeownership at less than 42 percent, but the population in the city is a migrant population due to incoming and outgoing government workers and students. West Virginia has the highest homeownership rate at 73.4 percent, representing a much less migratory environment and a stronger economy than say Detroit whose ownership levels are also down.