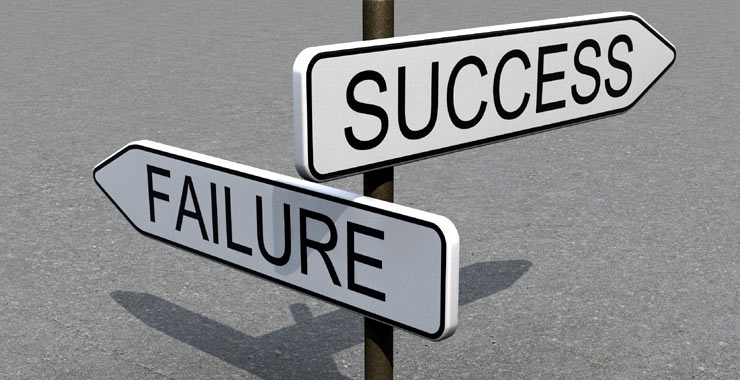 Success vs. failure in the real estate practice

When talking about success and failure in the real estate practice, I’ll begin by using myself as an example, as I don’t wish anyone to take offense. The facts of life, and the reality they construct, are often painful to acknowledge. Being brutal about myself is easy — now. Anywho, I hope we can all be honest with ourselves as a culture, and face facts as they are, good, bad, or ugly as the case may be. If reality is the building in which we hope to live, facts are the bricks giving it strength and durability.

I miss Grandma. Her wisdom was a never-ending source of learning and correction, not always a pleasurable process. The wisest, most kindhearted person I’ve ever known, she had the ability to cut through ignorant claptrap like mower blades through grass on a warm Saturday morning. Lookin’ back, it’s a wonder my picture didn’t end up next to the definition of the phrase, ignorant claptrap, in the dictionary. Facts were  often my sworn enemy. That’s the natural consequence when your ignorance is analogous to the bottomless pit of the black abyss.

Reality may be the first casualty of ignorance

Am I being too harsh on myself as a youngster? Not even close. Replacing ignorance with knowledge is the normal progression for most of us. For some it’s more painful than others. Human nature often dictates we wanna believe what we wanna believe.

Even though Grandma taught me tough lessons, she did so with a gentle heart. Knowing facts and the reality they deliver can be difficult pills to swallow, she sought to avoid adding to the discomfort. The learning/growing up process becomes harder as we age. Expectations increase. We’re expected to deal with things as they are. ‘Course if we all did that, denial wouldn’t have developed a cottage industry based upon treating it. But I digress.

Denial of reality makes us appear the fools we truly are

Licensed earlier than most, I was thrown into the deep end of the pool on Day 1. How green was I? I didn’t know enough to be nervous, much less scared. As a full time college student, my part time real estate hours were faux productive. I did what I was told, and listed properties. If memory serves, three of ’em sold outa the first 15 or so. Even that had to be due to a merciful God.

It was marvelous training though, as I learned rejection is rarely fatal. I also got to see, firsthand, what world class denial looks like. Though I learned to list property well, it turns out listing doesn’t necessarily mean selling. I learned this at the dinner table listening to an entirely different version of Grandma — that is, sans any fear of injuring my delicate feelings. Dad understood reality and the communication thereof. He cared not for subjectivity, excuses, or anything but results. There was no dishonor in failure, only in not facing the reasons for said failure, and refusing to adjust.

Fastest route to success: failure, and not in the cliché way

He taught me failure is nothing if not the quickest way to both learning and success. My bristling at his critiques of my performance didn’t phase him in the least. He was not a respecter of excuses. Those agents in his employ who complained about other agents being ‘lucky’ were fired on the spot. (Different days back then, as employers weren’t required by law to suffer fools. PC was still only a fantasy.) The idea was to produce results.

The last had predictably short professional lifespans in Dad’s company. Even back then, late ’69 through the early 70s, he told me how the agent population ‘pie’ was divided. About 5-10% made the vast majority of the money. The rest of ’em fought over the scraps. I say fought, which is a misnomer. He never stopped pointing out how 80-90% of full time agents were barely worth the energy it took to fire them.

When I asked him at dinner one night why he was so cynical. so brutally critical, he responded with a very different tone of voice. It was soft, and yet it eerily intense. I’ve subsequently surmised that it was evidence of how intent he was on me grasping what he wanted me to understand. I’ll do my best to paraphrase.

“Facts are the bricks that build reality. Sometimes they make us feel badly about ourselves or our efforts. Sometimes we give them too much power. We can’t compare our first year in real estate brokerage with 10 year vets. But if those same 10 year vets aren’t doing far better than their rookie year, they need to find something else to do. The fact is, some refuse to work hard. Others work hard, but don’t have the capacity to work smart. Then there are those capable of working hard and smart, but chose not to. Their failures, according to them, were never the consequence of their own choices.

Wanna know why they don’t disappear sooner? It’s because their wives have full time jobs. (In those days, there were far fewer women licensees.) In fact, it’s been my observation that working wives are the backbone of the real estate industry. (The sarcasm was nearly tangible.)

Others succeeded, working at the desk just four feet away due to pure luck. They got the best ad calls. They knew more people, yadda yadda, blah blah. See, to admit the other guy produced superior results simply due to his hard work, and effective learning curve, leaves the failed agent with no defense. Therefore, luck must be the answer.

So when I tell you not to make excuses when failing to list or sell something, I’m not saying you’re a failure. I’m saying to consciously learn from the experience. Become better from it, then move on. Failure isn’t personal, it’s merely a fact. The only real losers in life are those who won’t face reality, forcing those in their orbit to conform to their personal fantasy. Don’t be that person. Keep failing right up to the point of success.

It’s the way reality works. The facts of failure are the bricks building your success. Embrace reality. Don’t be like the average agent who thinks talking about reality is negative. The vast majority of real estate agents fail almost before they begin. I know you think I’m unnecessarily caustic or rude because I constantly remind you of the failure surrounding you. But the alternative to boldly recognizing the facts, and therefore reality for what it is, makes you just another excuse generator.

The refusal to acknowledge facts and the reality they create is the mentality of a loser. Losers don’t like anyone openly recognizing the fact that 8-9 of every 10 agents fail themselves completely out of the business almost before people learn their names. They were there Friday, then were never heard from again. It’s called reality, Son. Nothin’ more, and nothin’ less.

Be brutally honest with yourself when you fail, and your learning curve will be relatively short. Refuse what the facts clearly convey and you’ll not only fail, you’ll be thought of as a fool.”

The loud echo of a wakeup call

The few minutes it took for me to hear those words at dinner that night, had a profound affect on my thinking from that point on. Did I mention that my wife of just a few months was sitting next to me? To make it worse, that conversation took place the day after I was told this by a tax preparer.

“Mr. Brown, it would’ve been better if you hadn’t worked at all.”

My wife was sitting next to me then, too. Talk about reality. Little did I know she was gonna be called ‘the backbone of real estate’ just a day later by my own dad.

Grandma used to say experiences like that, were wakeup calls. The master of understatement. It woke me up, and I was never the same. Results became the reason I got up in the morning. Excuses became the scourge of my existence. Failure needs no excuse. It just is. Recognize it for the blessing it is, and learn from it.

Facts aren’t offensive, and saying them aloud isn’t out of line. Attacking those openly  declare facts says volumes about the speaker.

To those refusing to admit the reality of the real estate brokerage business, I refer you to both Ron White and Bill Engval, quoting each.