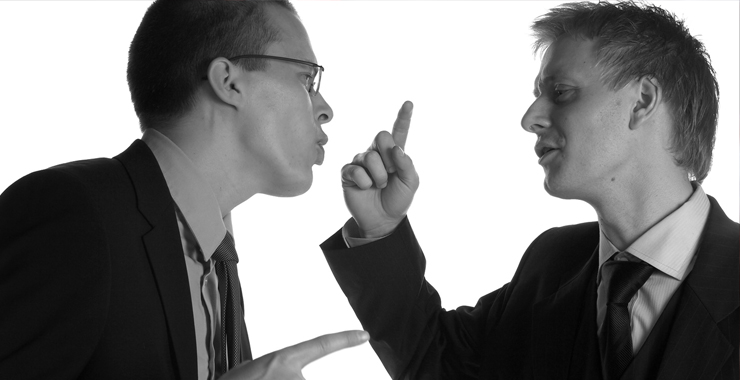 The rules for arguing

We’ve all created embarrassment for ourselves by parading our ignorance in public. Most of the time we’re convinced the problem resided in the other side’s inability to see the logic in our position. How many times have we realized the error in our logic after we’ve taken positions basically declaring gravity is a myth? This is me raising my hand in shame. Done it — many times. Merely recalling a few of ’em can make me blush a bit.

One of my OldSchool mentors tired of me arguing meritless points, so he laid down a brief set of rules.

As an aside — ever notice those who’d rather argue the earth is flat than learn that we’ve known otherwise for hundreds of years?

Those rules have been a gold mine for me on a few levels. They’re especially valuable when you don’t understand the other side’s logic. I’ve learned to first assume it’s my logic at fault. As a young man, if I didn’t understand their logic, the default was, ‘they’re illogical’, which is silly on its face. Admitting I didn’t understand and asking for clarification works wonders. Duh. Solid questions will either teach you something you didn’t know, or help you undress their logic. Either way, you make progress towards a better understanding of the subject matter. Once I accepted the value of learning I might be incorrect, debating (discussing?) became the conduit to many of those ‘teaching moments’. Learning something new, especially when it simultaneously cures your own ignorance, is what fuels our growth.

A real life example of the rules in action

I was a very involved youth baseball coach when my son was growing up. One day after practice, one of the dads mentioned that Cecil Fielder, a Detroit Tiger, had just inked a huge multi-million, multi-year contract. Some of the kids, knowing this new contract would pay Fielder far more than their local hero and future first ballot Hall of Famer Tony Gwynn, were enraged. I embraced the opportunity for a teaching moment.

First, I went over the above rules, to which they agreed, even though many were rollin’ their eyes. I allowed myself the first question.

Me: “Why shouldn’t Fielder get a far higher salary than Tony?”

Them: “Cuz Tony’s batting average is literally more than 100 points higher than Fielder’s!”

Me: “If that’s so, why did the Tigers decide to give him so much more money than Tony?”

Many at this point were sensing a trap, much to their credit. You could see it on their screwed up facial expressions. After all, the owners of a MLB team must be smart, right?

Them: “Don’t know cuz it makes no sense. It’s stoopid. Why did they?!”

What do you think the Tigers value more, total runs scored — OR — total number of singles hit?”

Me: “Answer the question.”

Me: “Let me come from another direction. How do we know who wins a baseball game?”

Them: “The one with the most runs.”

Lights go on above a buncha teenage heads. What they learned was that yes, .350 hitters are worth a bunch, but those who produce what, you know, wins games? They get paid a BUNCH.

Using the rules in my industry

Using those rules is how I learned what works better in real estate as a brokerage. My initial belief, set in stone, was that those representing nothing but buyers were kings of the real estate road. Then I had The Conversation (calling it a debate would have insulted debaters everywhere).

Though agents specializing in buyer representation can and do earn impressive incomes, listing agents who also take care of buyers do much mo betta. I had to learn this from someone packin’ over a decade as a broker who also happened to own the biggest listing brokerage in town. When I learned the facts, it became painfully obvious I had come to the table clueless in real estate land. It also showed me I was unnecessarily limiting my earning potential. It’s one thing to opt in for a lower income with full knowledge.

It’s quite another to leave money on the table due to ignorance, or worse, cuz you’re somehow emotionally committed to conclusions which are fantasy based.

If I hadn’t been forced into adhering to the aforementioned rules, my emotional, opinion driven attachment to an erroneous belief would’ve remained intact. I would’ve been plowing fields guaranteed to deliver smaller harvests than other available fields.

In business this approach has saved me countless times. We all believe in what we’re convinced are axiomatic principles. We’ve also learned from time to time that some of those beliefs were proven false, by evidence about which we were ignorant.

I propose a new way forward

Finally, how many times have we allowed ourselves to ignore mountains of evidence disproving something we knew was true? How many times have we seen folks personally attack someone simply because their position has been undermined by incontrovertible, documented evidence? When we do that it, not only does it reflect poorly on us, it’s prima facie evidence that we’re outa ammo.

Let’s argue our various cases, but in a way allowing both sides, if at all possible, to part ways knowing the truth. Being wrong about something isn’t a big deal. Defending that wrong position in the face of empirical evidence to the contrary makes us dumber than dirt.

In this article:professionalism, Real Estate