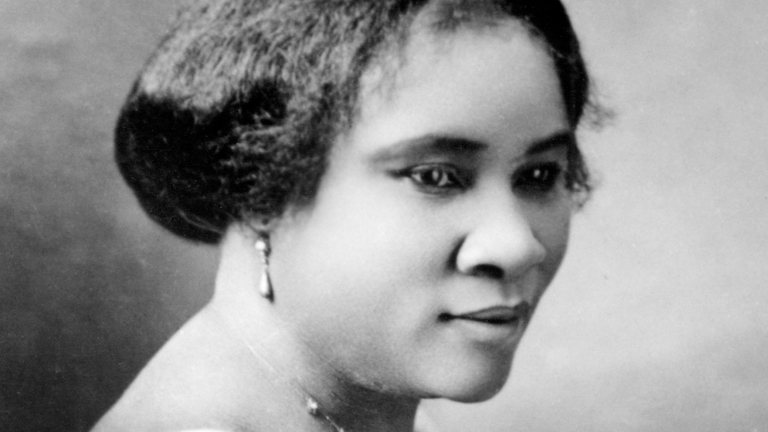 These days, it seems like Oprah gets all the bragging rights. I don’t think it’s quite fair that some car-gifting mogul gets to bask in the glory of a path that was paved a century ago. **No offense, O Great Winfrey. You’re cool, too. Please don’t take my Altima back.**

It’s time to pay our respects to the first female self-made millionaire in America. My friends, I’d like to introduce you to your new idol, Sarah Breedlove, better known as Madam C. J. Walker.

This gal had just about every card in the deck working against her. Both of her parents and all of her siblings before her were born into slavery. Her mother died when she was five, and her father passed the following year. Orphaned, she lived with her older sister until she married at age 14.

As if that wasn’t enough, a mere two years after her first child was born, Sarah’s husband died. I mean, she just couldn’t catch a break. Unfortunate event after unfortunate event. She then moved to St. Louis to live with her brothers, working as a washer woman for a mere dollar a day. Classic rags-to-riches stuff.

Her brothers worked at a local barber shop, and she wound up learning a thing or two about hair care while sharing a home with them. This planted the seed that would lead to her working with Annie Turnbo Malone, selling African American hair care products. As she learned more about hair, she must have realized she had a knack for it, because she decided to roll up her sleeves and put some indie elbow grease in.

After moving to Denver to work on her own products, she married Charles Walker, who provided the advertising know-how that would help her venture succeed. She adopted the name C. J. Walker and began traveling and training women in the fields of beauty and sales.

Eleven years later, in 1917, she called her first convention of so-called “beauty culturists” in Philadelphia. Here, she rewarded her top agents as well as those who were the most philanthropic towards local charities.

What I love about C. J. is that as her business grew, so did her awareness of the social climate around her. She never forgot where she came from, never hesitated to give back, and never gave up. She lectured on topics such as women’s independence, helping educate other black women in the ways of business.

Upon her death, it was determined that she was the wealthiest African-American woman in the country. In true C. J. style, she left two-thirds of her future profits to charity.

If I ever get mega-famous, I’m doing it the C. J. Walker way: Keep a level head, educate and help others, and put your community first.

In this article:entrepreneur, The News