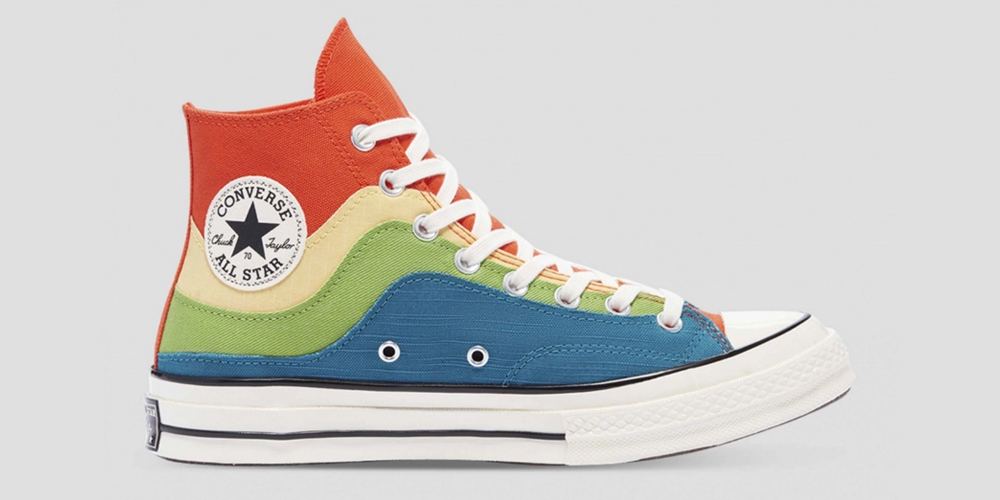 In a TikTok video that quickly went viral, aspiring designer Cecilia Monge (@ceci.monge) showed her portfolio designs she sent Converse when applying for a 2009 internship with the popular sneaker company. Converse never replied to her application, but that doesn’t mean the didn’t receive her designs. Lo and behold, two years later, Monge felt “shook” to see the new Converse National Parks shoes with designs and colors uncannily similar to her own work. We can’t say the giant Nike subsidiary, Converse, definitely stole Monge’s ideas, but we can share the original TikTok video and a follow up video by Monge and let you decide for yourself.

Side by side, the designs are strikingly similar, to say the least, with wavy patterns and a near-identical color scheme. With 5.7 million views and more than 118k comments, Monge drew a massive outpouring of support. People believed Monge’s side of things, and not Converse’s response that comes off like a corporate version of “Nuh uh, no we didn’t.” To add fuel to Monge’s growing fire of indignation over what appears to be an out and out ripoff of her UNPAID design work, soon other designers and people in creative careers shared similar stories of when their ideas and designs were also poached by a big company.

It’s bad enough to solicit unpaid work from applicants. However, to then produce that design or tweak it slightly and use it without compensating the designer (or writer, artist, musician, etc.)? Why, that’s just lower than a snake’s belly. It’s another example of how some large corporations act with impunity, knowing they can outlawyer nearly any individual designer or creative person. It adds to the growing mistrust we individual contributors have that the company gives even one fraction of an iota of a rat’s patootie about us—profits over people, yadda yadda yadda. People are truly upset. In order to help collect these shared stories of similar suspect use of unpaid work or ideas, Monge created the hashtag #designersspeakup on TikTok.

In addition to more support and Converse-shaming, designers shared their stories. It gets painful to watch, because it gives one the impression that this happens all the time. Another TikTok user, @braunlaw, J. Braun, Esq., took this opportunity to add videos under that hashtag with tips on how applicants can protect their intellectual property without spending a ton of money to do so.

Aren’t we tired of watching the little guy lose and the big guys do whatever they want, no matter whom it may harm? I know I am.

In this article:artist, converse, Design, small business, The News, theft