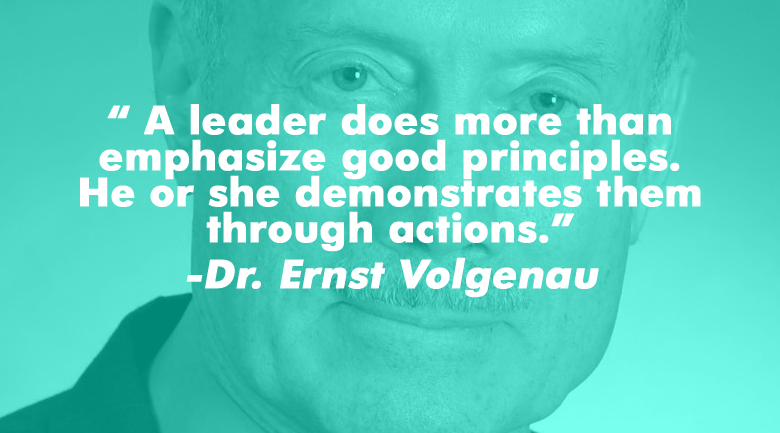 Fostering leadership in your organization

After a distinguished military career, Dr. Ernst Volgenau founded SRA International from his basement, which is now a multi-billion dollar company with over 5,300 employees and endless awards for their innovation. SRA offers IT solutions for big government and professional organizations, solving some of the biggest tech problems today – security, big data, business intelligence, analysis, and more, all while emphasizing honesty and service at every turn.

To discover how a company like this grew to be so tremendously successful, we tapped the mind of Dr. Volgenau who outlines below how to foster leadership in your organization:

For about three decades my company (SRA International) was very successful. We grew rapidly from one person to about $1.7 billion and had a successful IPO and growth on the New York Stock Exchange. The reason for our success was good leadership. Later when we faltered, it was because our leadership declined. Here are a few things we did right and wrong.

One of the first principles of leadership is to communicate to employees precisely what you expect of them. We started with an excellent corporate culture and a good simple business plan. All our successful leadership principles flowed from this basis. The values and culture of SRA have always made it a special company. The basic ethic is Honesty and Service which implies high integrity in business, caring about customers and employees, and giving to society. These values and the resulting culture attracted capable people who led to the company’s success.

The business plan was not a long complex document; it was brief, focusing our energies where we had a market edge. SRA is a professional services company specializing in business analysis and information technology. Our key managers knew that part of their job of leadership was to solve customer problems and to do such a good job in the process that they would get more work from existing customers or references that they provided.

We began with orientations for every new employee and often renewed these discussions after people had been with the company several years. In the meetings we discussed the implications of Honesty and Service. We emphasized leadership obligations, particularly taking care of their people.

We rewarded executives well for success

While their salaries were at the median for the industry, they could get generous bonuses and stock options if they performed well. Although we were privately held company for 24 years, our plan was to go public and we valued the stock periodically so people could see the payoff from owning equity.

All our senior executives (at times more than 100 people) had performance plans. Each plan consisted of two parts. One part was quantitative showing objectives for revenue growth, profit, and new orders. Another part was qualitative, describing objectives for leadership in supporting the corporate ethic. Two key factors were helping their employees to succeed and supporting SRA organizations in addition to their own. The qualitative portion was graded by the supervisor of the executive and a final judgment was made by the CEO. The scores for the quantitative business success and qualitative performance were combined and the total was used to determine bonus and equity awards.

We often held leadership courses led by our most capable executives and including stimulating outside speakers, seminars, and teambuilding exercises. We emphasized various leadership aspects of our culture. Most importantly a good leader must be ethical. Our continuous reminders about Honesty and Service ensured that everyone understood this principle. We sometimes spoke of noblesse oblige, which means roughly the obligation of the nobility to serve society. Our nobility was the most senior people in the company.

Another precept was “Walk the Talk.” A leader does more than emphasize good principles. He or she demonstrates them through actions. An additional principal was that “the best ideas win.” A good leader listens to the views of his or her employees in order to make the best decisions. By implication a good leader has humility; however this quality cannot stand in the way of decisiveness.

For a few years our company faltered. We were never in danger of going out of business, but our performance was nowhere near as good as it had been. There were several reasons. One was a poor decision regarding an acquisition. Another was the market, which had been vibrant and growing during most of our existence but began to falter. However the most important reason by far, was our lack of emphasis on leadership. The problem was not due to any single decision; rather it was lack of attention to daily details: walking the talk, caring about people, soliciting their views, and many other measures.

An example is career management. SRA had many large computer systems jobs. When each one ended, there was the danger that people would be laid off. Therefore, we established advocates who helped employees find jobs within the company. This was important because our people knew that the company cared about their careers. However, as the company declined, these positions were gradually eliminated to save money. Some employees began to believe the company no longer cared, and attrition increased. The result was probably a far larger cost than if we had not eliminated the positions.

Thus good organizational leadership is much more than a few pronouncements by executives. It requires continuous attention by the senior management team, and then a good deal of patience and determination in maintaining a healthy corporate culture.