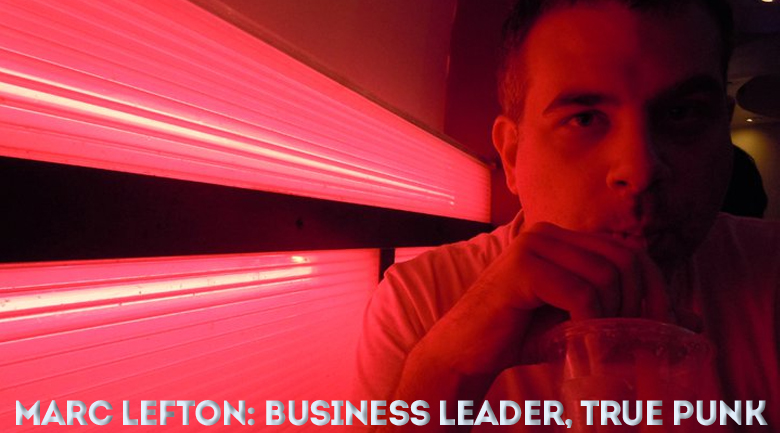 Marc Lefton owns a creative-driven digital marketing agency called Half Fiction and is part of the startup team at RentCentives. As a small business owner and leader in New York City, he jokes that he is “good enough at a lot of things which makes me dangerous enough to cobble together whatever needs to be done before I find people more talented than me to do it better.”

Lefton is well known in the ad world as a rebellious figure, a sought after creative, and while you may not see him being a sugary salesman at a trade show, you’ll see his work across the globe from Super Bowl ads to high profile television, print, but in recent years, he has become a prominent figure in the digital advertising and social media world.

Below is an insightful interview with Lefton complete with punk music references:

[pl_blockquote pull=”right”]
“No day is ever typical.”
[/pl_blockquote]No day is ever typical. The concept behind Half Fiction is to have these asynchronous groups of “talent pods” which consist of freelancers, teams, and other small agencies that we manage at a strategic level. Running a company like this is very cost-effective for our clients because they’re not paying for unused talent, but sometimes last minute things come up and no one is available, then it means I have to figure out a way to get it done no matter what. When we’re busy, it means I’m wearing a lot of hats.

I’m not a morning person, as I’m doing this interview close to 1am. On any day I might design something, approve copy, send an invoice, attend four meetings while playing “conference call bingo” and come up with a strategy.

I was raised on Long Island, a place where parents of my generation fled the awful situation in the late 70s in NYC for the suburbs. Being surrounded by three bodies of water and a city everyone is terrified of means most people never leave. But I couldn’t wait to get out and get to the city. I’ve lived all over Brooklyn, mostly, and spent two years in Western Massachusetts.

[pl_blockquote pull=”right”]
Threatened with parents seeing a bad
report card, “I came up with the bright
idea to design my own report card.”
[/pl_blockquote]I was always a very lazy student and a procrastinator. Somehow I got away with it for most of school because teachers liked me. Each year they would say “Marc, you got away with not turning in most of your homework in 3rd grade, but things will be harder in 4th grade and they won’t stand for it!” But each year, it was really the same thing. When 9th grade rolled around, they really started to count everything a lot harder. And all of a sudden, I’m looking at failing every single class in my first semester of high school. The report card is on its way home. What’s an entrepreneurial 14 year old to do? First thing was to steal the report card out of the mailbox. Then I waited for a while. That was my mistake.

I came up with the bright idea to design my own report card, complete with 95 averages and implausible comments like “outstanding participation in class!” I handed my report card to my parents the day they had already called to get my grades. They were not amused. My mom worked in a small ad agency and started making me go to work with her on school vacations to keep me out of trouble.

I found the art department and they put my new found graphic design skills to use. I was hooked immediately – the first day I was there, I created a headline and saw it in the newspaper the next day. I kept asking questions, and soon I was using their equipment to make my own underground newspaper in high school. They banned it.

My first press release was to the local newspaper about the issue and they wrote a feature story on it. Again, being lazy, I could not afford the School of Visual Arts where I had been accepted and never bothered to have any safety schools. Instead, I got a job working nights at an ad agency making supermarket circulars before I graduated high school. Things went quickly from there. By the time I was 20, I was working on Super Bowl commercials.

Instead, I’m trying to get rid of things I hate to do, so it doesn’t feel like work. And I’m trying to at all costs remove work that is “urgent.” Someone else can deal with that last minute change, the server being down. Once that’s in place, if it’s the weekend and I’m inspired to work, I’ll work. If it’s Tuesday and I want to go see a movie in the middle of the day or go to a museum, then I’ll do that. It doesn’t take much time for me to recharge my batteries, sometimes a few hours. It’s about having the little breaks and being able to do all the things we want to do while making sure the work stuff happens when it needs to.

Any form of injustice or irrationality. If you’re into Myers-Briggs, I’m an INTJ, which means we actually expect people to make logical sense. If you’re a logical person and I think you’re wrong, I can take you through the problem and hope I can convince you to see things my way. It’s hard for me to understand when someone is irrational or unfair.

If you could spend one day in the life of another industry leader, who would it be?

I was already somewhat immersed in advertising at the time. Back then I’m not sure if I entirely grasped the fact that you could make a career out of advertising. The agency where my mom worked did a lot of local retail stuff, so it didn’t seem like art so much as a technical or craftsman’s job.

It wasn’t until later that it even occurred to me that people came up with concepts for ads. I think at that point I was like “Well, I seem to be good at this, let’s see where this goes.” Someone asked me if I had a five year plan recently. I said, “Five years ago, what I’m doing now (social media) did not exist. Five years before that, what I was doing then (Internet) did not exist. So I try to stay flexible.”

What would people be surprised to learn about you?

Despite not having any piercings or tattoos to show for it, I was highly immersed in the local underground punk rock scene throughout the 90s. I owned a punk fanzine that had distribution across the east coast and advertisers from all of the indie punk labels. I got to hang out with the Ramones. And I started one of the first punk websites.

What inspirational quote has stuck with you the longest?

“It is not the critic who counts; not the man who points out how the strong man stumbles, or where the doer of deeds could have done them better. The credit belongs to the man who is actually in the arena, whose face is marred by [pl_blockquote pull=”right”]
“This quote is the best one
an entrepreneur can live by.”
[/pl_blockquote]dust and sweat and blood, who strives valiantly; who errs and comes short again and again; because there is not effort without error and shortcomings; but who does actually strive to do the deed; who knows the great enthusiasm, the great devotion, who spends himself in a worthy cause, who at the best knows in the end the triumph of high achievement and who at the worst, if he fails, at least he fails while daring greatly. So that his place shall never be with those cold and timid souls who know neither victory nor defeat.” – Theodore Roosevelt

This quote is the best one an entrepreneur can live by, because the worse you can do is “fail while daring greatly.” And what great entrepreneur doesn’t fail greatly a few times before getting it?

What advice do you have for Millennials struggling to get a job?

Make your own job. The concept of a job may not last your lifetime. The future of earning a living is in being flexible – a nomad. Never depend on one company for your paycheck.