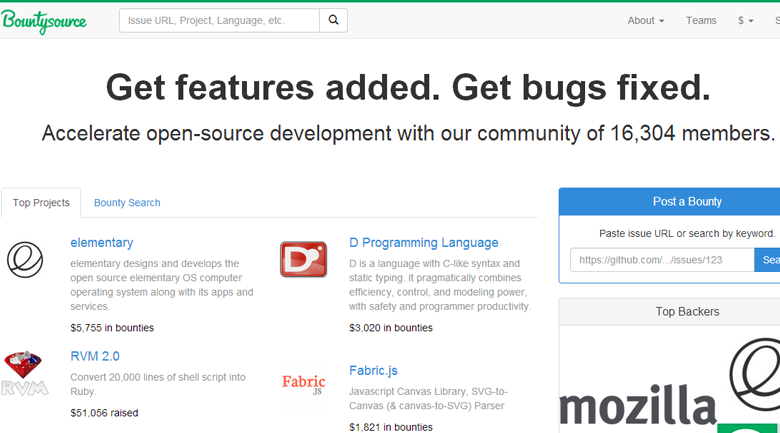 Nowadays when people say “crowdfunding,” most people know exactly it is, but just a few short years ago, the term was not commonly used. Bountysource is easy to explain now: it is a crowdfunding site aimed at open source software developers, but a decade ago, people just were not sure what it was or how it worked. Even the founders said the project died quickly because people were unsure of its intentions.

Cofounder and COO, David Rappo, said, “[Bountysource] ran for a few months before we realized this wasn’t gonna pay our bills, and we needed to move on and get real jobs,” but approximately a year and a half ago, Rappo and CEO Warren Konkel, decided it was time to give Bountysource another shot. And this time, the platform has been well-received. “Nowadays, we can say it’s a crowdfunding platform for open source software, and people are like, we get it,” Rappo says. “The time is right: people not only understand crowdfunding, but they love it.”

According to Steven Melendez, at FastCo, this is largely due to Bountysources’  recently hosted successful and well-publicized funding campaigns for Neovim, (a modern update to the venerable Vi used by generations of Unix hackers), and for RVM 2, an enhanced tool for Ruby developers managing libraries of third-party code.

So, why not choose Kickstarter or Indiegogo?

Bountysource allows open source software developers to offer a “bounty” to developers as an incentive to address bugs, or contribute to a particular feature.  With Bountysource you can keep funds in the system and pay it out to different developers on different versions, or updates, allowing you to recruit exactly who you need as development progresses.

This is not just limited to software developers however, anyone can post a bounty offering to pay for improvement to their favorite open source tool. And once a bounty is opened, other users are able to pledge their own funds until the bounty’s high enough that a developer is willing to take on the task.  Once a developer agrees, and the backers are satisfied, the developer can be paid by check, PayPal, or Bitcoin.

Allowing multiple backers to fund a project that they already love seems like a pretty good recipe for success, especially given comparable sites like Kickstarter and Indiegogo  focus more on meeting the cumulative financial goal, rather than adapting to the changing needs of a project as Bountysource is able to do.

In this article:Business, crowdfunding