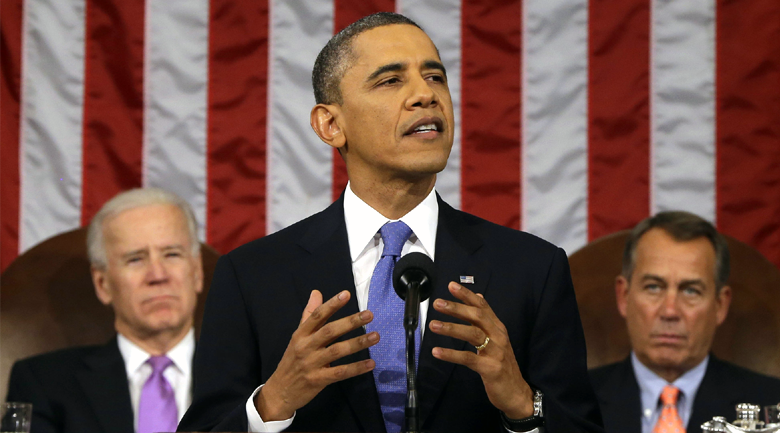 Together, we have cleared away the rubble of crisis, and can say with renewed confidence that the state of our union is stronger.

But we gather here knowing that there are millions of Americans whose hard work and dedication have not yet been rewarded. Our economy is adding jobs – but too many people still can’t find full-time employment. Corporate profits have rocketed to all-time highs – but for more than a decade, wages and incomes have barely budged.

It is our generation’s task, then, to reignite the true engine of America’s economic growth – a rising, thriving middle class.

It is our unfinished task to restore the basic bargain that built this country – the idea that if you work hard and meet your responsibilities, you can get ahead, no matter where you come from, what you look like, or who you love.

It is our unfinished task to make sure that this government works on behalf of the many, and not just the few; that it encourages free enterprise, rewards individual initiative, and opens the doors of opportunity to every child across this great nation.

The American people don’t expect government to solve every problem. They don’t expect those of us in this chamber to agree on every issue. But they do expect us to put the nation’s interests before party. They do expect us to forge reasonable compromise where we can. For they know that America moves forward only when we do so together; and that the responsibility of improving this union remains the task of us all.

Our work must begin by making some basic decisions about our budget – decisions that will have a huge impact on the strength of our recovery.

Over the last few years, both parties have worked together to reduce the deficit by more than $2.5 trillion – mostly through spending cuts, but also by raising tax rates on the wealthiest 1 percent of Americans. As a result, we are more than halfway towards the goal of $4 trillion in deficit reduction that economists say we need to stabilize our finances.

Now we need to finish the job. And the question is, how?

In 2011, Congress passed a law saying that if both parties couldn’t agree on a plan to reach our deficit goal, about a trillion dollars’ worth of budget cuts would automatically go into effect this year. These sudden, harsh, arbitrary cuts would jeopardize our military readiness. They’d devastate priorities like education, energy, and medical research. They would certainly slow our recovery, and cost us hundreds of thousands of jobs. That’s why Democrats, Republicans, business leaders, and economists have already said that these cuts, known here in Washington as “the sequester,” are a really bad idea.

Now, some in this Congress have proposed preventing only the defense cuts by making even bigger cuts to things like education and job training; Medicare and Social Security benefits.

That idea is even worse. Yes, the biggest driver of our long-term debt is the rising cost of health care for an aging population. And those of us who care deeply about programs like Medicare must embrace the need for modest reforms – otherwise, our retirement programs will crowd out the investments we need for our children, and jeopardize the promise of a secure retirement for future generations.