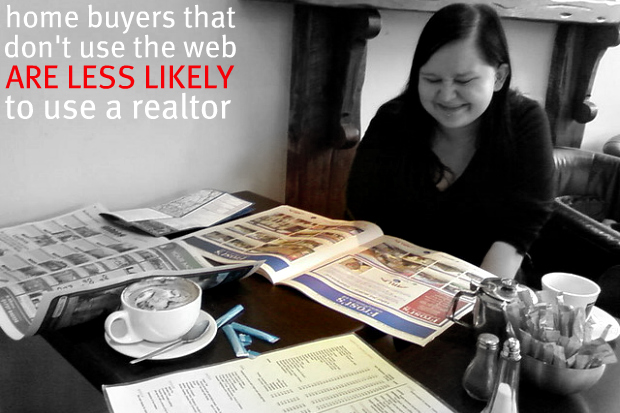 The 2011 National Association of Realtors® Profile of Home Buyers and Sellers surveyed 5,708 home buyers and sellers and found that home buyers that use the web in their home search differ in other behaviors and demographics than buyers who do not use the web and the findings may surprise you.

It is no surprise that the typical buyer who used the internet is younger, averaging at 42 years old with non-web searchers averaging 60 years of age. What is surprising however, is that buyers that used the web are actually more affluent, despite the assumption that an older buyer is more affluent – the typical buyer who used the Internet in their home search has a median household income of $83,700 compared to those who did not use the web whose median household income is $60,300.

Buyers that search the web are more likely to go to open houses and call on yard signs, contrary to the popular belief that web searchers stick to the web – the research shows that typically, buyers that search via the web have an inherent interest in researching deeply.

The icing on the cake is that 90 percent of buyers who used the web to search for homes use a real estate agent as opposed to the 70 percent of buyers who didn’t use the web. The standard belief is that tech savvy shoppers are often anti-agent because of various startups that have launched over the years to supplant Realtors, but it hasn’t worked, in fact, the opposite has occurred.