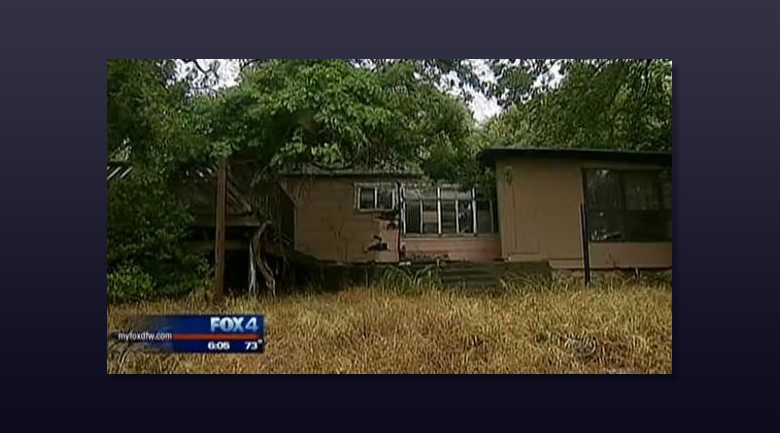 Image of the condemned home that was originally set to be demolished.

Image of the condemned home that was originally set to be demolished.

Fort Worth resident David Underwood recently checked in to his late grandmother’s home on Lake Worth as he and his wife are renovating it with plans on moving in after the project is completed. As they pulled up, he notices the grass is somewhat high, but then, “We rounded the corner and my wife, Valerie says, ‘The house is gone David,’” he told the Dallas Observer. “I’m looking at the yard, so I looked and I’m like, ‘Wow, OK.’”

Apparently, the City of Forth Worth had contracted a demolition crew to demolish a condemned home next door, but gave the crew the wrong street address, resulting in Underwood’s home being destroyed.

The City is currently investigating how this could happen. “A mistake was made,” Director of Code Compliance Brandon Bennett told the Dallas Morning News. “We have to identify where the weak link was and fix that so it doesn’t happen again. We need to look at all of our upcoming demolitions, and double- and triple-check these things to make sure everybody has dotted the i’s and crossed the t’s.”

While the City looks at their own books, Underwood is seeking compensation for the mistake, but the Observer notes his attitude is upbeat and he remains unshaken. When asked why he is so positive, he notes that in his job at United Community Centers, a nonprofit that assists low-income families, he comes across people less fortunate.

“Ninety-seven percent of the people we serve earn less than $17,000 per year,” he said. “I see people every day who have it so bad. I still have a house. It’s not like I’m living in a cardboard box down by the river.”

Mistakes are typically either human or digital, as has been the case during the robosigning debacle wherein homes were wrongfully (illegally) foreclosed upon or when bureaucracies either private or public insist they are not making a mistake as we saw in several cases of Bank of America foreclosing on the wrong address. Either way, the City of Fort Worth is reeling from being in the spotlight and has expressed they intend on doing everything possible to insure this never happens again.

In this article:city of fort worth, housing