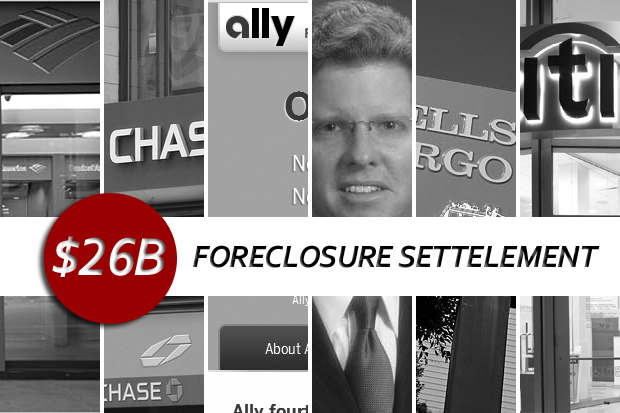 Settlement details were not made completely public until today, as the U.S. Department of Justice filed agreements with all five servicers separately, each consisting of over 300 pages in which relief measures were outlined in detail that will go toward helping underwater borrowers and victims of illegal foreclosures. Until today, relief measures and details on how foreclosures would be handled in the future were only made public by statements to the press by officials and single page summaries.

The settlement that stalled repeatedly for over a year is pending final judicial approval, but is expected to be approved. Last week, details were released, outlining how service members illegally foreclosed upon or currently underwater would be given relief.

Additionally, Bank of America had already released details confirming 200,000 of their borrowers would receive an average of $100,000 in relief, a reduction in principal much higher than the other four banks in the settlement would be offering their borrowers. Homeowners must qualify and any mortgage owned by Fannie Mae or Freddie Mac will not qualify for principal reduction from Bank of America.

The settlement details outline that homeowners who lost their homes to foreclosure by any of these five banks or their acquired banks over the past three years may see checks up to $2,000. Many critics note that the most overlooked segment of homeowner in this settlement is the very homeowners who were illegally foreclosed upon, who may now find difficulty in pursuing civil action against these banks in light of this national settlement.

Federal and state agencies will now oversee the process more closely, according to the settlement, and more stringent standards will be in place for these banks. Bank of America, Ally Financial, JPMorgan Chase, Citigroup and Wells Fargo have settled civilly, but all remain vulnerable to criminal charges which are being pursued by a task force recently formed by the Obama administration.