According to the National Association of Realtors (NAR), existing home sales continued to improve in November with low inventory supply pressuring home prices, rising 5.9 percent for the month, spiking 14.5 percent compared to November 2011. NAR reports that sales are at the highest level since November 2009.

Dr. Lawrence Yun, NAR chief economist, said there is healthy market demand. “Momentum continues to build in the housing market from growing jobs and a bursting out of household formation. “With lower rental vacancy rates and rising rents, combined with still historically favorable affordability conditions, more people are buying homes. Areas impacted by Hurricane Sandy show storm-related disruptions but overall activity in the Northeast is up, offset by gains in unaffected areas.”

Median prices, and the impact of distressed properties

The national median existing-home price for all housing types was $180,600 in November, up 10.1 percent compared to November 2011, marking the ninth consecutive monthly year-over-year price gain, which has not happened since September 2005 to May 2006.

Dr. Yun said, “The market share of distressed property sales will fall into the teens next year based on a diminishing number of seriously delinquent mortgages.”

Total housing inventory at the end of November fell 3.8 percent to 2.03 million existing homes available for sale, which represents a 4.8-month supply at the current sales pace; it was 5.3 months in October, and is the lowest housing supply since September of 2005 when it was 4.6 months.

Buyer types in the market

First time buyers accounted for 30 percent of purchases in November, down from 31 percent in October and 35 percent in November 2011.

Existing-home sales in the West rose 0.8 percent a pace of 1.19 million in November and are 4.4 percent higher than a year ago. With ongoing inventory constraints, the median price in the West was $248,300, which is 23.9 percent above November 2011. 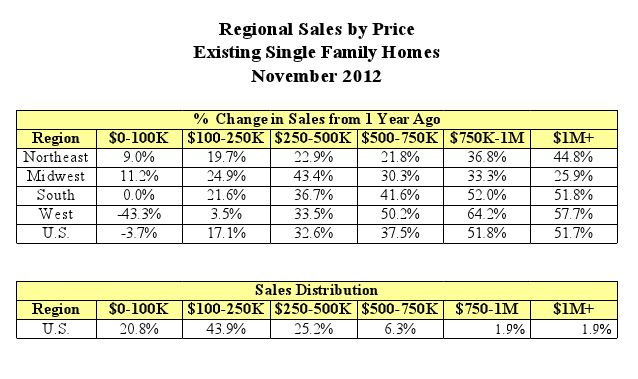 As opposed to former eras, the NAR is approaching their future forecasting with cautious optimism. Dr. Yun said that the housing market recovery should “continue through coming years” unless the nation falls off of the “fiscal cliff,” and assuming that there are no further limitations on the availability of mortgage credit.

Dr. Yun pointed to improving existing and new home sales and housing starts as all seeing “notable gains this year in contrast with suppressed activity in the previous four years, and all of the major home price measures are showing sustained increases.”

Many economists agree that there are gains being made in housing, but we urge all to note that these signs of improvement are only signs of improvement, and not an actual recovery, as housing is just now moving past bottoming out and we’re finding signs of life which is hopeful, but not yet a recovery.