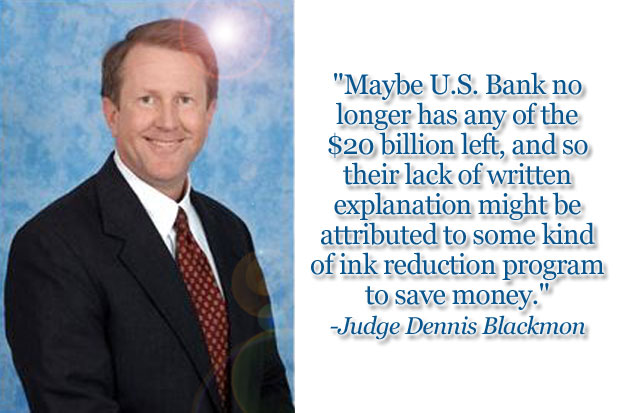 If you don’t know the name Judge Dennis Blackmon, it is a name that is catching on. Judge Blackmon is being dubbed a hero for publicly admonishing U.S. Bank for taking over $20 billion in federal aid while refusing mortgage modifications for homeowners that may qualify for permanent modifications.

A homeowner alleged his application for a loan modification through U.S. Bank was denied “without numbers, figures, or explanation, reasoning, comparison to guidelines, or anything,” which U.S. Bank asked the judge to dismiss.

“This court cannot imagine why U.S. Bank will not make known to [the homeowner], a taxpayer, how his numbers put him outside the federal guidelines to receive a loan modification,” the five page opinion stated. “Taking $20 billion of taxpayer money was no problem for U.S. Bank. A cynical judge might believe that this entire motion to dismiss is a desperate attempt to avoid a discovery period, where U.S. Bank would have to tell [the homeowner] how his financial situation did not qualify him for a modification.”

The line Judge Blackmon is being hailed for is his snarky statement, “Maybe U.S. Bank no longer has any of the $20 billion left, and so their lack of written explanation might be attributed to some kind of ink reduction program to save money.”

Seeing case after case like this and deeming U.S. Bank as “poorly run,” Blackmon opined, “Sometimes, only the courts of law stand to protect the taxpayer. Somewhere, someone has to stand up. Well, sometimes is now, and the place is the Great State of Georgia. The defendant’s motion to dismiss is hereby denied.”