According to the S&P/Case-Shiller home price index released this morning, home prices in September rose, marking the indicator’s sixth month of home price increases, which Case-Shiller says points to a housing market that is “in the midst of a recovery.” Some argue that housing is still finding its bottom given that other economic indicators are not improving as steadily as pricing, but others point out that recovering lost equity is the biggest challenge to a decimated sector.

The S&P/Case-Shiller 20-city composite posted a 0.3 percent increase in September following a 0.8 percent gain in August, and prices are up 3.0 percent from September 2011. 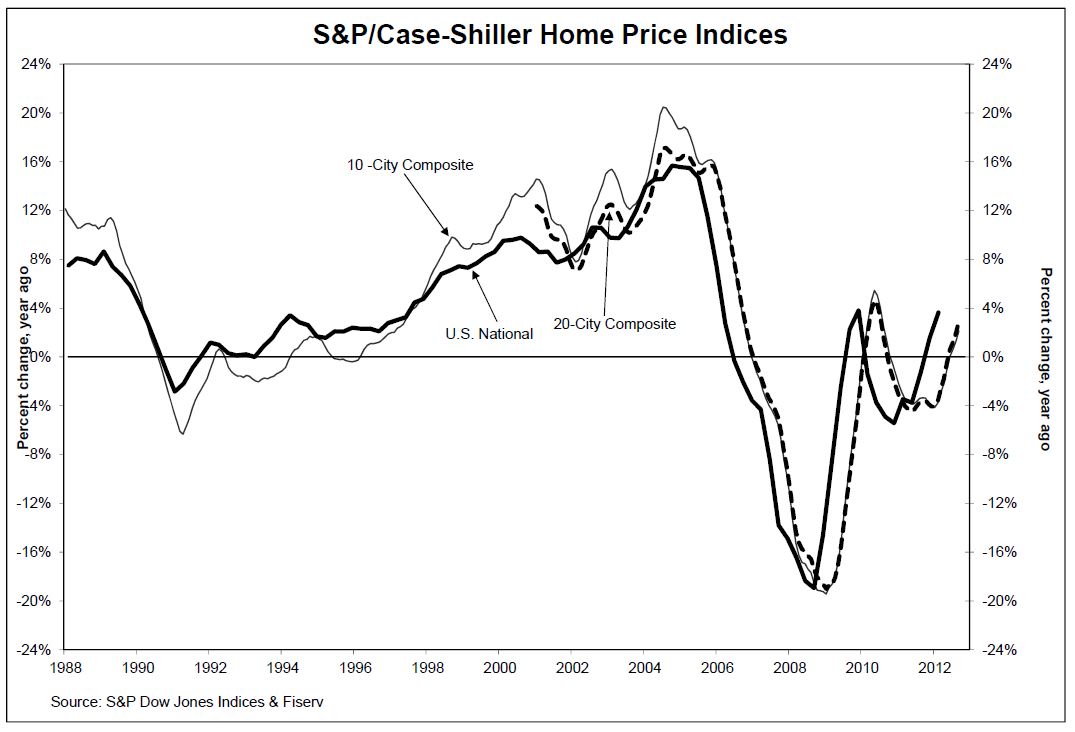 Of the 20 cities tracked by Case-Shiller, 13 posted monthly gains in the month of September, the most recent month being reported by the index. Blitzer said in a statement, “Phoenix continues to lead the recovery with a +20.4% annual growth rate. Atlanta has finally reversed 26 months of annual declines with a +0.1% annual rate as observed in September’s housing data. At the other end of the spectrum, Chicago and New York were the only two cities to post annual declines of 1.5% and 2.3% respectively and were also down 0.6% and 0.1% month-over-month.”

Housing is finding its footing

While housing starts have risen to the best level seen in over five years and home builder confidence recently increased for the seventh consecutive month, there are two issues that continue to threaten housing from the sidelines – credit and the fiscal cliff.

Federal Reserve Chairman, Ben Bernanke says tight credit conditions are holding back housing, which the National Association of Realtors’ Chief Economist, Dr. Yun agrees with in his 2013 forecast which also adds that the fiscal cliff could present a major obstacle to housing’s recovery.

Regardless of tight lending conditions and the fiscal cliff, the Case-Shiller data indicates that home prices are still roughly 30 percent below their 2006 peak, which proves that housing has a long way to go before recovering, but it does appear that the free fall has finally stopped and housing is finding its footing in preparation for the long road to recovery.