Housing slowly, slowly getting back to “normal”

According to the newly released December 2012 Housing Barometer by Trulia, three key housing indicators combined spell a shift in the housing market, a change for the positive. Looking at construction starts, existing home sales, and delinquencies plus foreclosures, Trulia’s Chief Economist, Dr. Jed Kolko says “are now relative to (1) their worst point during the crash and (2) their normal levels.”

The key factors the company says contributed to the surge are construction starts, which jumped in December to a 54-month high, existing home sales which although they fell 1.0 percent for the month, they hit their second highest level since November 2009, and lastly, delinquency and foreclosure rates combined remained at a four year low.

“The recovery, however, is uneven,” Dr. Kolko tells AGBeat. “Construction is above normal levels and there are few foreclosures left to come in ‘healthy’ markets like Houston and San Francisco. At the same time, construction lags far below normal and the foreclosure pipeline remains large in Miami, Chicago, and many other metros.”

Housing recovery is uneven in America 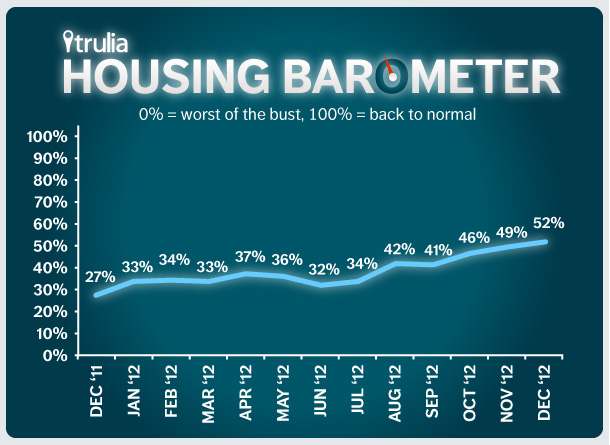 Last month, when the housing market hit 49 percent back to normal, Dr. Kolko opined, “Does halfway back to normal mean the glass is half-full or half-empty?” Dr. Kolko asks. “The half-empty view is that our three housing measures hit bottom (on average) in 2009, so it’s taken the market a long time–three years–to get to the halfway mark. But the half-full view is that halfway back to normal is better than anyone –myself included–predicted for 2012 at the start of this year.”