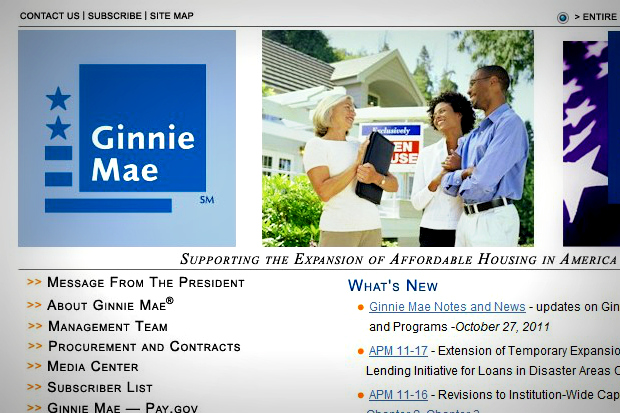 Ginnie Mae (or the Government National Mortgage Association), announced that it has posted record earnings for its 2011 fiscal year, earning $1.18 billion in net income, their best performing year to date, surpassing 2010 fiscal earnings of $541.5 million. Ginnie Mae is owned by the government and its primary function is to guarantee then sells mortgages on federally insured loans to investors of mortgage-backed securities.

The government agency said it helped finance three out of every five American home purchases in the 2011 fiscal year ending September 30th during which period their retained earnings rose to $15.7 billion. So far this year, Ginnie Mae has issued more mortgage backed bonds than Freddie Mac, replacing the agency as the second largest funder of home loans in America.

“Our approach to risk-taking is conservative and our ability to finance government-insured mortgages is helping to keep the housing market afloat,” Ginnie Mae’s President Ted Tozer said in a statement.

“Ginnie Mae’s role and significance in U.S. housing finance is as strong as it has ever been,” said Ginnie Mae EVP Mary Kinney. “Since the onset of the credit crisis, Ginnie Mae has guaranteed $1.3 trillion, which financed about 4.8 million single-family homes and multifamily units for families across the country. Our ability to simultaneously attract private capital from the global capital markets and provide effective business solutions for MBS issuers keeps capital flowing into U.S. housing even during recessionary periods.”

A far cry from Fannie and Freddie

“Ginnie Mae has had a remarkable year; it’s our best yet,” said Tozer. “Our financial performance this fiscal year—despite a mortgage market still in turmoil—is a testament to our well-functioning business model. Our business is simple, our approach to risk-taking is conservative, and our ability to finance government-insured mortgages is helping to keep the housing market afloat.”