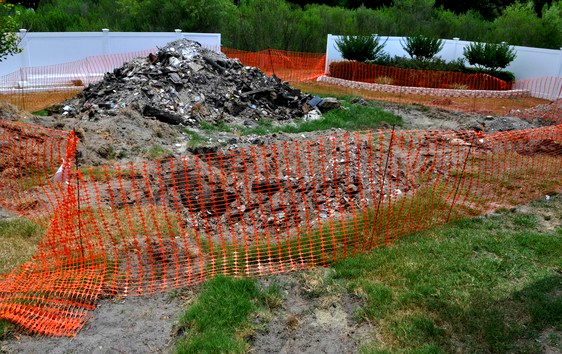 Install a pool, find a landfill

Tampa homeowner Brian Dyer hired a contractor to install a pool in the backyard of his five year old home in the Oak Run Subdivision for his four children. Within hours of breaking ground, construction halted when the contractor discovered a sizable underground dump complete with tires, washing machine tubs, a lawn mower and old trash dating back to the 1970s.

With a hole in his yard and a pile of garbage beside it, Dyer approached the county about the eyesore and was told they were unaware of the trash and told him he would be required to handle the problem.

As an additional slap in the face, earlier this year, the Florida Department of Environmental Protection (DEP) told Dyer he would be required to remove the landfill material and fill it in with dirt at his own cost, as neighbors near the subdivision have wells and the garbage being disturbed could put the water source at risk for contamination.

DEP this spring told Dyer he would have to pay thousands out of pocket to remove the junk as well as be required to install underground watering monitors to test his neighbors’ water. Last week, Dyer was informed that only one well showed signs of contamination but levels were so low, it is suspected to be unrelated.

It has now been revealed that Dyer’s home is built on top of a clay pit dug by Polk County decades ago when it paved roads in the area. The pit ended up being used by area children as a swimming hole and older locals claim to remember the pit being the size of a football field.

When Brenda Fox bought the land, they decided to fill in the pit but didn’t want the cost of hauling dirt, so it was turned into a private landfill decades ago.

In 2003, Fox sold the land to the subdivision developer and claims she disclosed the former pit and covered landfill to the developer. Fox says the landfill was even offered to Florida Tile which had been dumping discarded ceramic tiles for years.

The football field size landfill could potentially run underneath the Dyer home and possibly his neighbors’ homes. Cracks have appeared in the Dyer home and his neighbor’s home since the pool construction began, affirming the possibility of a larger problem that the county maintains is not their problem. The builder denies knowledge of any former landfill.

Last weekend, the hole in the Dyer yard was filled and they are glad to not have to look at junk and orange plastic fencing, but the family now plans to have the property X-rayed to determine the size of the hole and pursuing whoever is responsible that could help him clean up, according to Tampa Bay Online.

The family maintains a calm demeanor, but claims to intend on resolving the situation and with the city, developer and builder claiming no responsibility, the courts may have to get involved.