Optimism and pessimism about housing

According to the 2014 National Association of Realtors® Home Buyer and Seller Generational Trends study, younger buyers are optimistic about their home and see it as a good investment, and older buyers are more likely to downsize to match changing lifestyles. Fully 80 percent of recent buyers believe their home is a good investment (87 percent of buyers age 33 and below, and 74 percent for buyers 68+).

Dr. Lawrence Yun, NAR chief economist, said Millennials are entering the peak period in which people typically buy a first home. “Given that Millennials are the largest generation in history after the baby boomers, it means there is a potential for strong underlying demand. Moreover, their aspiration and the long-term investment aspect to owning a home remain solid among young people. However, the challenges of tight credit, limited inventory, eroding affordability and high debt loads have limited the capacity of young people to own.”

Read also: Minority home buyers tend to be younger, and other stats

NAR reports that more than one in ten recent buyers had delayed their home purchase because of outstanding debt, and of the 20 percent of Millennial buyers who took longer to save for a downpayment, 56 percent cited student loan debt as the biggest obstacle. Fifteen percent of buyers aged 34 to 48 had delayed buying, with 35 percent citing student debt and 46 percent citing credit card debt.

Interestingly, Millennials plan to stay in their home for 10 years, while the Baby Boom generation as a whole plans to stay for a median of 20 years.

Despite tight credit, Millennials are buying in droves

Even with the market frictions, the study found that the largest group of recent buyers was the Millennials, who comprised 31 percent of recent purchases; followed closely by Generation X at 30 percent. Younger Boomers accounted for 16 percent of home purchased, Older Boomers made up 14 percent, and the Silent Generation only bout 9.0 percent of homes recently.

How generations find their home

Buyers of all ages were most often referred to their agent by a friend, neighbor or relative, although older buyers were more likely to have worked with the same agent they previously used to buy or sell a home. In choosing a real estate agent, the agent’s honesty and trustworthiness was the most important factor for all ages except for senior buyers, who more often mentioned the agent’s reputation, which was the second most important factor for other age groups.

Nearly nine out of ten buyers of all ages were satisfied with their agent’s honesty and integrity, knowledge of the purchase process, and knowledge of the real estate market. A comparable level would be likely to use their agent again or recommend to others.

Why did each generation buy and/or sell?

Younger buyers typically moved to larger, higher priced homes, but there is a clear trend of downsizing to smaller homes among both Younger and Older Baby Boomers, and the Silent Generation.

The reasons for selling a home also varied by generation. Younger sellers were more likely to need a larger home or move for job relocation. In comparison, older buyers wanted to be closer to family or friends, or said their home was too large or they were moving due to retirement.

The older the seller, the longer they were in their home. Millennials had been in their previous home for a median of five years, while the Silent Generation stayed for 14 years.

Sellers of all ages also typically found a real estate agent through a referral or friend, or used the same real estate broker or agent from a previous transaction.

While all sellers wanted help in marketing their home to potential buyers, younger sellers were more likely to want their agent to help with selling the home within a specific timeframe and pricing the home competitively.

Images below courtesy of the National Association of Realtors: 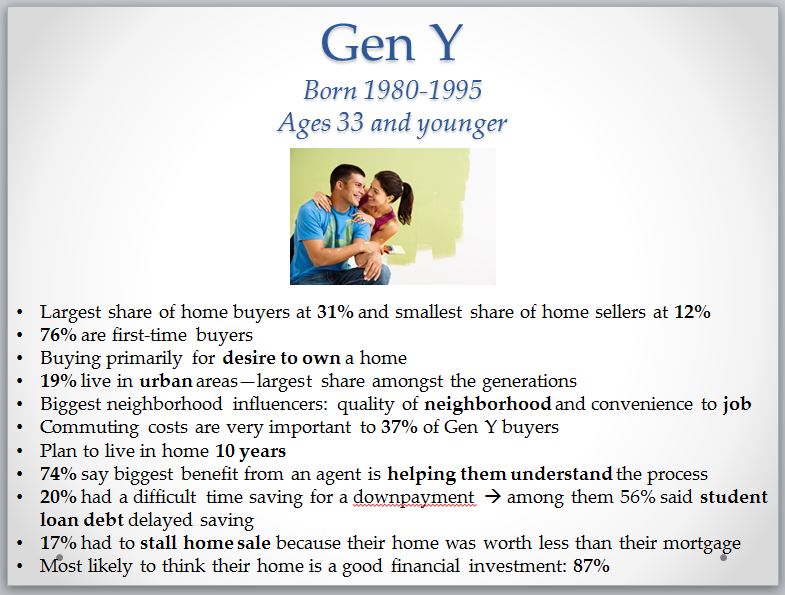 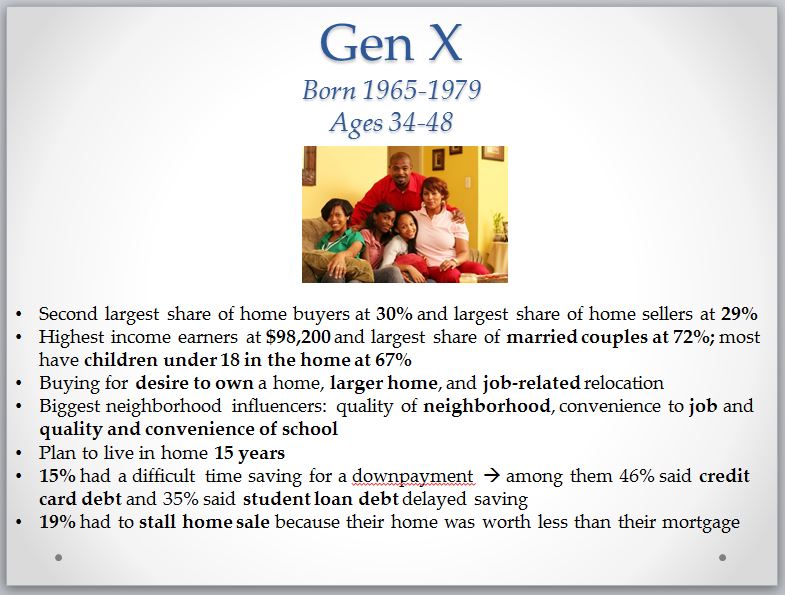 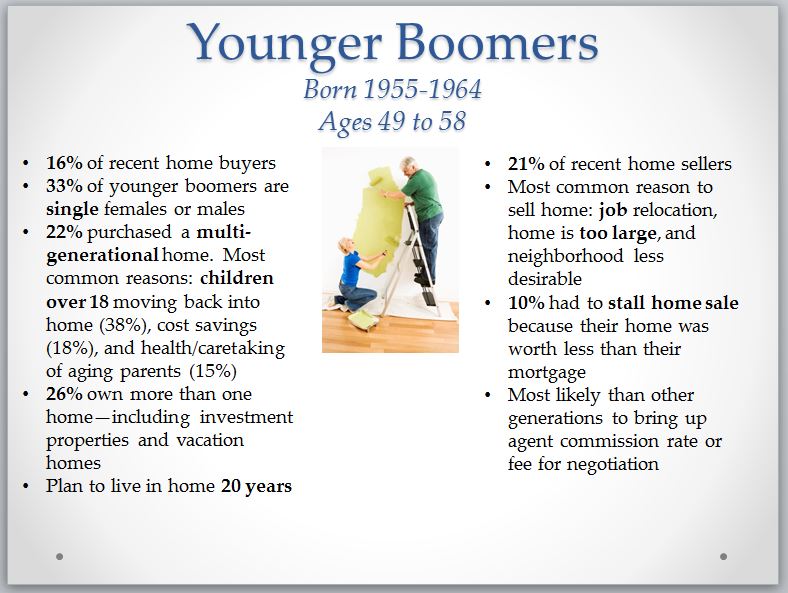 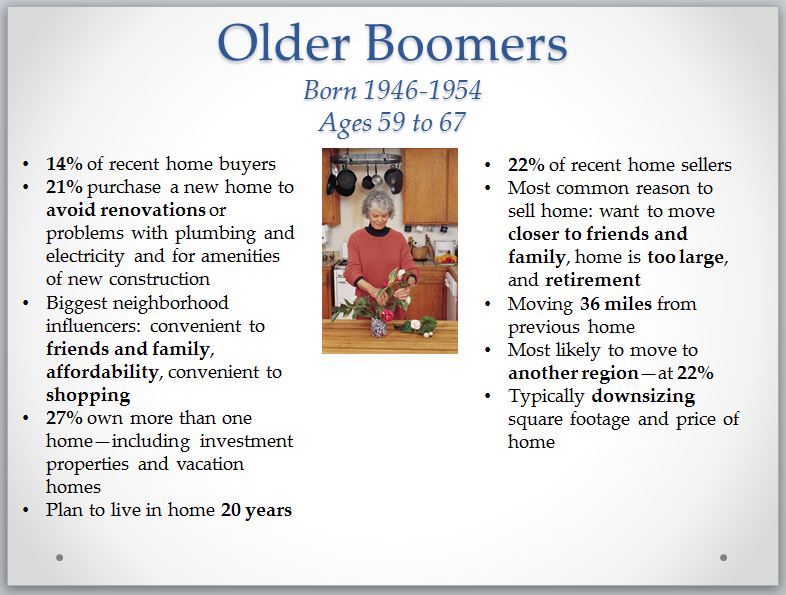 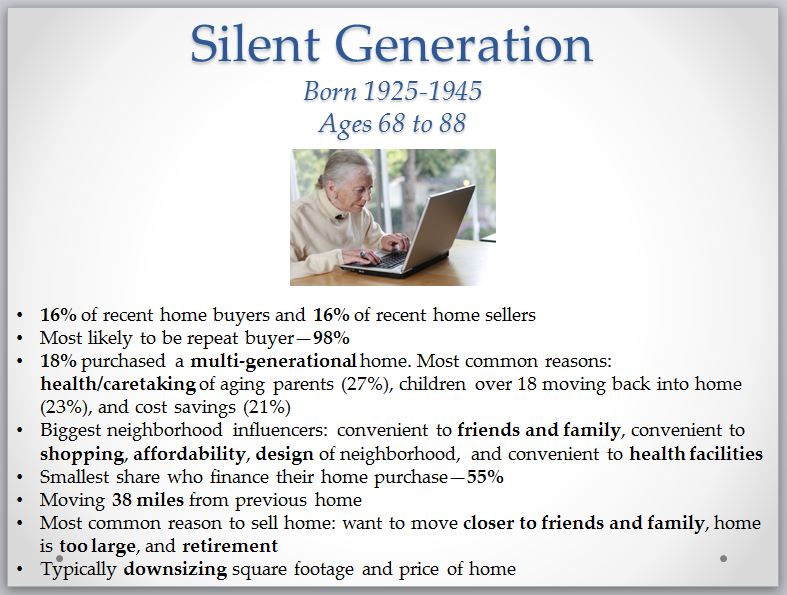