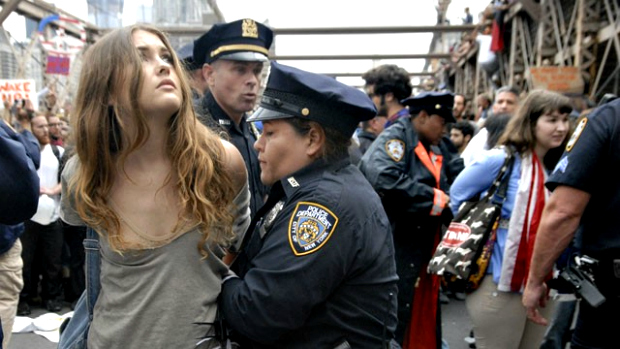 On both sides of the political spectrum, there is uproar. Tea Party rallies rail against over-regulation while loosely organized (yet large) protests are taking place in New York City against Wall Street fraud and tax loopholes for the rich. While traditional television media is under fire for representing the “Occupy Wall Street” protest in New York as a “few hundred participants,” the crowds actually numbered in the thousands and literally brought the city to a halt.

“We are the 99 percent” is one rally cry of the Occupy Wall Street protesters, a cry that has been echoed online in the form of “We are the 99 percent” blog posts depicting people’s self-submitted photos with a written explanation of how they feel they have been victimized by the economy, particularly by Wall Street’s bad behavior, noting that the 1% is the richest of the rich that pay reduced tax rates, leaving the 99% to suffer.

Wearethe99percent.tumblr.com says, “We are the 99 percent. We are getting kicked out of our homes. We are forced to choose between groceries and rent. We are denied quality medical care. We are suffering from environmental pollution. We are working long hours for little pay and no rights, if we’re working at all. We are getting nothing while the other 1 percent is getting everything. We are the 99 percent. Brought to you by the people who occupy wall street.”

Not all sides of the political spectrum will agree as to why or how our nation got to this state and why so many feel disenfranchised. Some say poor leadership, other say Wall Street bailouts, but regardless of the why, below are ten real people that have submitted photos that depict how they are underwater on mortgages or having to choose between food and their mortgage, with one common thread- fear and frustration: 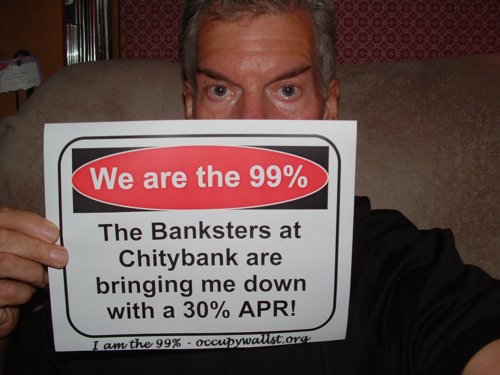 With his submission, this man added, “My credit was just fine when they wanted to give me more…and more. It was so good that a very low interest rate was the enticement to do business with them. Then they decided that I wasn’t such a good risk. They bumped the rate to 30%. They are forcing me into bancruptcy! I’VE NEVER MISSED OR BEEN LATE ON A PAYMENT! How did my credit worthiness go down because of THEIR crimes?!?” 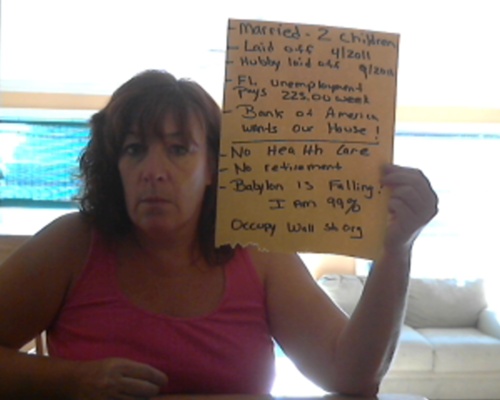 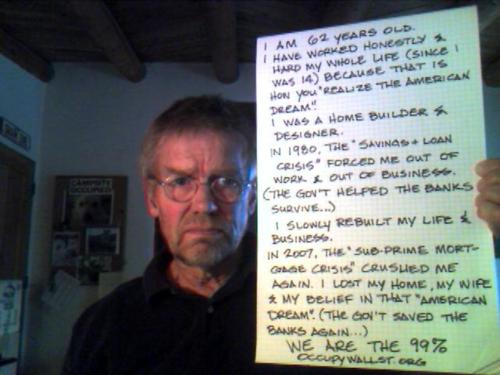 The sign above says, “I am 62 years old. I have worked honestly and hard my whole life (since I was 14) because that is how you “realize The American Dream.” I was a home builder and designer. In 1980, the “Savings & Loan Crisis” forced me out of work and out of business. (the government helped the banks survive…) I slowly rebuilt my life and business. In 2007, the “Sub-Prime Mortgage Crisis” crushed me again. I lost my business, my home, my wife and my belief in that American Dream. (the government saved the banks again…) WE ARE THE 99%” 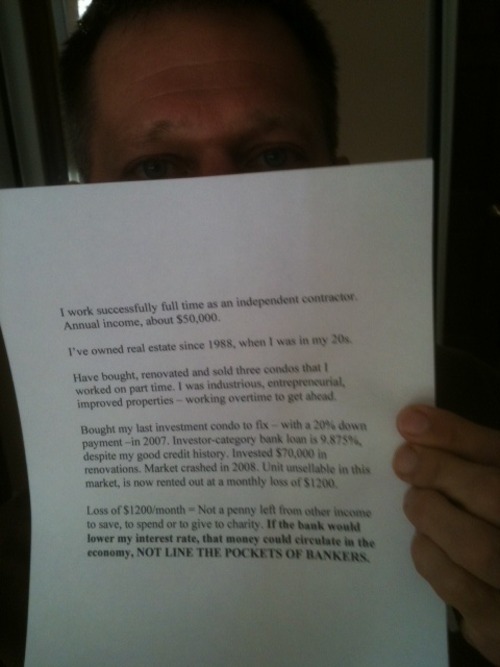 He also added, “The inability of Washington and the banks to fix the housing market leaves hard-working, small time condo flippers (a.k.a. property improvers) stuck paying multiple mortgages with no money left to buy anything, to save anything or to make charitable contributions. I am the 99 percent.” 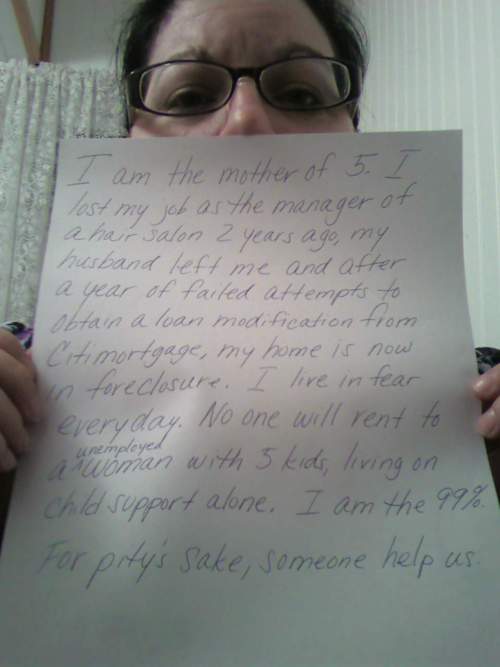 The note above states, “I am the mother of five children. I lost my job 2 years ago as the manager of a hair salon when the bad economy forced it to close. My husband left me and after a year long battle with the bank trying to get a loan modification, Citimortgage is foreclosing on my home. I live in fear everyday. No one will rent to an unemployed, single parent who survives solely on child support. I am the 99 percent. For pity’s sake, someone help us.” 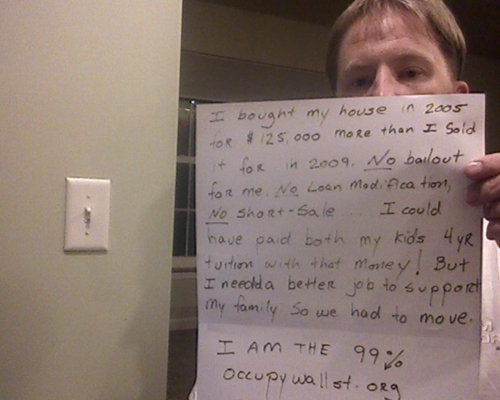 His sign says, “I bought my house in 2005 for $125,000 more than I sold it for in 2009. Where was my bail out. Where was my bonus for taking a risk that didn’t pay off and didn’t increase shareholder value? That’s right, Wall Street got my bonus instead.” 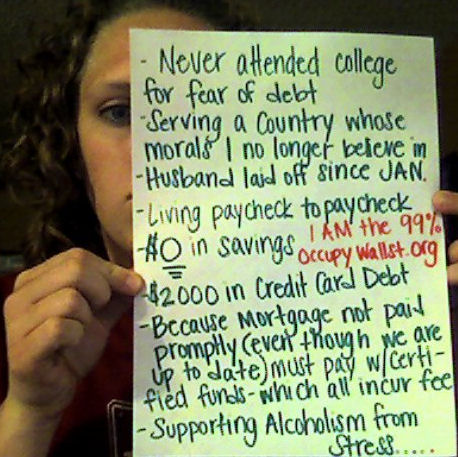 Additionally, she added, “My bank (GMAC) wants certified funds because the payments were “late” three consecutive months in a row- but if you looked at it the payments were late because they tried to take out our mortgage before I got to transfer funds from other accounts- then there were the insufficient funds charges- and you can’t submit a payment because we were on automatic payments and they try twice before they give up on you- So if I had tried to make a payment before the due date it would have just counted as a “double payment” and we can’t afford that…Where is my BAIL OUT???” 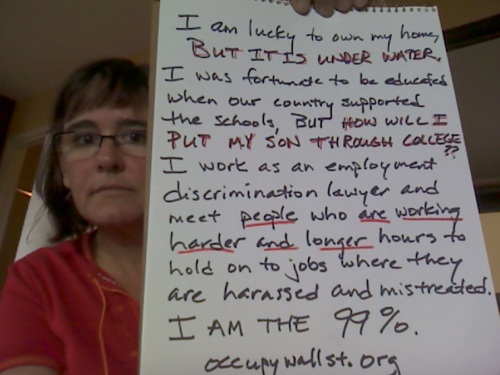 This sign says, “I am lucky to own my home, BUT IT IS UNDER WATER. I was fortunate to be educated when our country supported the schools, BUT HOW WILL I PUT MY SON THROUGH COLLEGE?? I work as an employment discrimination lawyer and meet people who are working harder and longer hours to hold on to jobs where they are harassed and mistreated. I AM THE 99%” 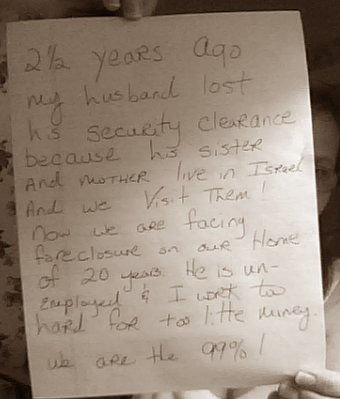 The above reads, “2 and a half years ago my husband lost his security clearance because his sister and mother live in Israel and we visit them. Now we are facing foreclosure on our home of 20 years. He is still unemployed and I work too hard for too little money.
We are the 99%.” 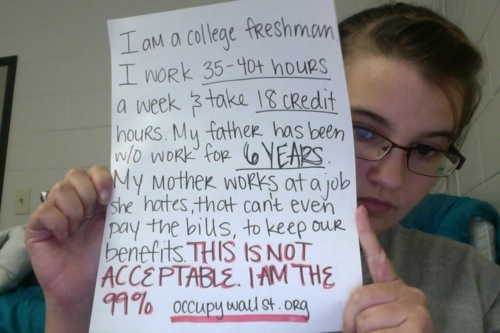 She explains further, “I’m 18 years old, and have been working 40+ hours a week at my job since i was 16, just to help my parents pay the bills. Even now, I work full time just to pay my loans and tuition and help my parents pay bills/provide for my sister. I take 18 credit hours (i’m required to take 15+ and have a minimum 3.0 gpa to keep my state scholarship and grant; without it, my dream of higher education is over). My family’s combined income is <$32000 dollars a year, but the only financial aid I qualify for from the government is a $5500 unsubsidized loan because my father had to liquidate his entire 401k to pay off the mortgage on our house, driving our income up to >$80000 (a mortgage that my parents paid on for 20 years without fault, but they began foreclosure proceedings on after missing 1 payment). My father was laid off after working for 20 years at his company, but ran a fairly successful lawn care business for several years after. 6 years ago, he had to shut it down as our state’s unemployment shot up 14% and no one could afford the extremity of lawn care. MY FATHER HAS A COLLEGE EDUCATION. My mother works 40 hours a week at a SHIT job that she hates, that she has developed several illnesses from, just to keep our benefits; she doesn’t even make enough to cover the bills. Boeing came to South Carolina and for the first time in 6 years my father has a job prospect. 6 YEARS. where is this promise of a comfortable life now? and i’m one of the lucky ones! this is not acceptable. i am the 99%”