Because we are still to close to the situation as a nation, there is not a consensus among economists as to the cause of the foreclosure crisis, the accelerant, or when the collapse will be over. Some say that housing and finance are in recovery mode, others say we have yet to hit bottom, while others say we are bouncing at the bottom.

One of the most contentious points regarding the housing crash is the role of subprime mortgages. Some camps say it is the sole cause of the crash, that the government forced banks to loan to unqualified borrowers, others point to studies that show a small portion of defaults are actually subprime, rather are tied to job loss and instability.

One noted economist, Dr. Mark Fleming at CoreLogic noted this week in the first MarketPulse report released by the company that subprime mortgages play a heavy role in the economy of real estate and will continue to do so.

Fleming notes, “While it is widely known that foreclosure starts dropped due to policy interventions such as state and local moratoria, HAMP, the drop in the unemployment rate or an improving economy, less obvious are the types of loans that are driving foreclosures. The initial surge of foreclosures in 2007 and 2008 were driven by subprime loans that were sensitive to the surge in the unemployment rate and deteriorating economy.”

“Once the economy stabilized in 2009,” Fleming added, “and as many of these loans prepaid off the lender’s books, the role of the subprime loan as the primary driver of foreclosures receded. However, as home prices entered a free fall period in late 2008 and early 2009 all loan types were affected, especially plain vanilla prime loans. Given that the outlook for the overall economy remains tepid for the next couple of years, subprime loans will continue to play a role in driving foreclosures beyond 2012 and into 2013.” 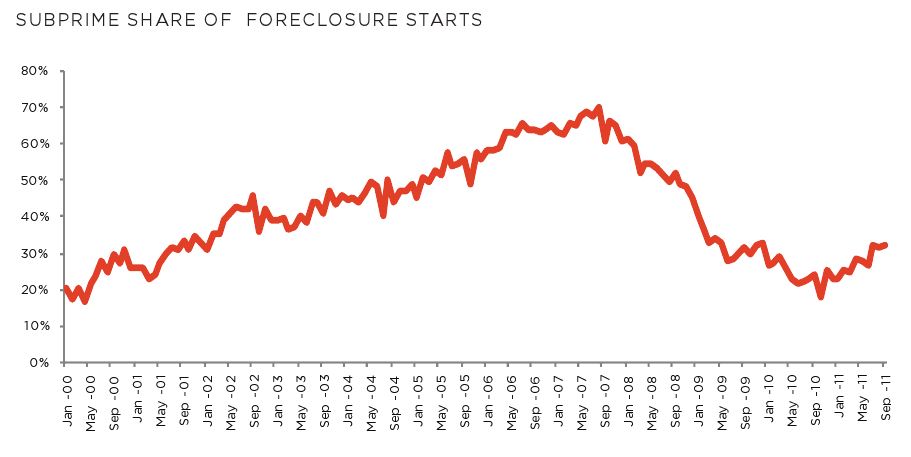