While some parts of the nation struggle to regain so much lost ground, others are rapidly recovering, creating tighter housing markets and multiple-offer situations across entire cities. Of roughly 350 metro markets in America, 59 returned to or exceeded their last normal levels of housing activity, according to the National Association of Home Builders/First American Leading Markets Index (LMI), released today.

Today’s report represents a net gain of 11 metros year over year, and the index’s nationwide score ticked up to .88 from a March reading of .87.

The NAHB said in a statement, “This means that based on current permit, price and employment data, the nationwide average is running at 88 percent of normal economic and housing activity. Meanwhile, 28 percent of metro areas saw their score rise this month and 83 percent have shown an improvement over the past year.”

“I think the big news here is that regions outside of the energy states continue to gain ground,” said NAHB Chief Economist, Dr. David Crowe. “It’s a promising sign to see areas like Los Angeles and San Jose joining the top ten largest MSAs showing a recovery. We still expect 2014 to be a strong year for housing and to aid in the overall economic recovery. The job market continues to mend and with that we will see a steady release of pent up demand of buyers.” 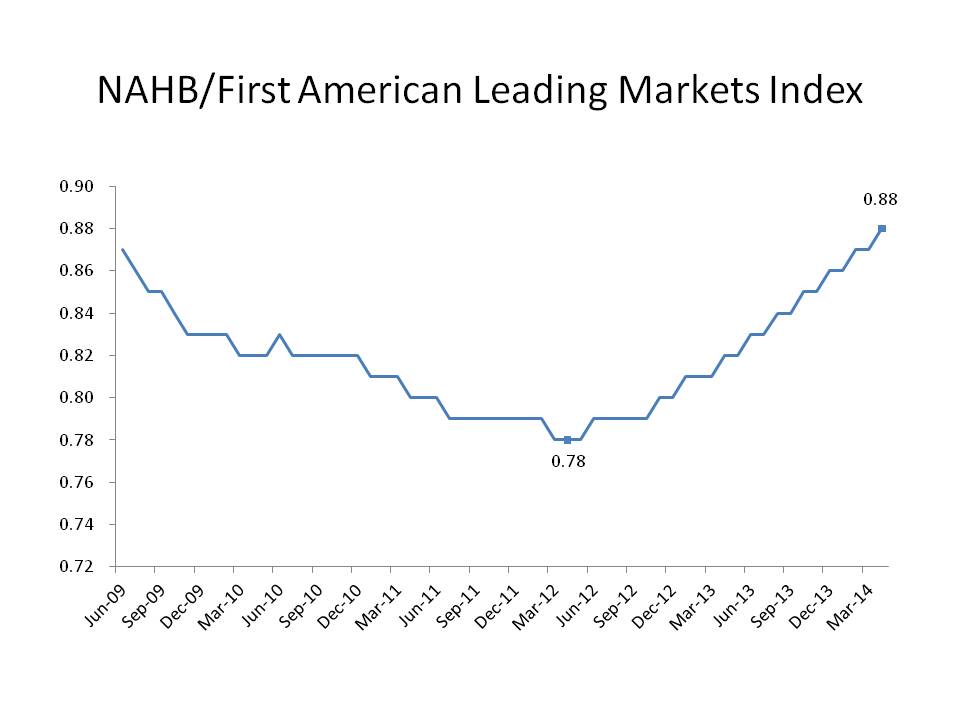 “Things are getting slowly better overall,” said NAHB Chairman Kevin Kelly, a home builder and developer from Wilmington, Del. “And with the housing market now entering the spring buying season, the fact that the nation’s economy is headed in the right direction is a very promising sign.”

“Stronger employment numbers seemed to be the driving force this month—an important factor to the recovery of our economy,” said Kurt Pfotenhauer, vice chairman of First American Title Insurance Co., which co-sponsors the LMI report.