According to the September 2012 Trulia Price Monitor and Trulia Rent Monitor, which track asking prices and rents, adjusted for the changing mix of listed homes, asking prices are up 2.5 percent nationally compared to September 2011. The real estate media company tied their indices to the current political debates, noting the timing of specific data points as beneficial to President Obama.

Asking prices are up 2.5 percent nationally year-over-year. Prices are now up in 74 of the 100 largest metros. At this pace, Trulia forecasts prices will be up 4.0 percent for 2012 overall – the first yearly price gain since 2006.

Trulia points out that the asking prices are up year-over-year in six of the seven swing states: Nevada, Florida, Colorado, Iowa, Missouri, and Virginia, but down in North Carolina, noting that price recovery in Florida and Nevada where the housing bust was the most severe is “good news for Obama.” 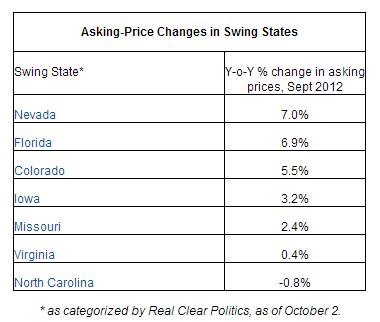 The slow march toward recovery

“As asking prices continue to climb, 2012 will almost surely be the first year of rising home prices since 2006,” said Dr. Jed Kolko, Trulia’s Chief Economist. “Right now, prices are recovering across the country, with few local markets left behind. While some of these increases are a bounceback from the huge price declines during the recession, price gains are strongest where job growth has boosted housing demand and where declining inventories lead to tighter supply.”

“The timing of the housing price rebound couldn’t be better for President Obama,” said Jed Kolko, Trulia’s Chief Economist. “Prices are up sharply in Nevada and Florida, two swing states that suffered a lot of housing misery, and have risen in six of the seven electoral swing states. Rising prices take pressure off the candidates to propose housing solutions before the election – and make it harder for Romney to criticize the Obama Administration’s housing record.”

The road to recovery is a long one, with Dr. Kolko himself projecting the nation will be back to the pre-recession normal in 2016, an estimate that some call conservative, while many others project is overly optimistic. Housing cannot possibly recover before the election is decided, and signs of health are contingent on the policies of who will be the leader of our nation in the coming years.