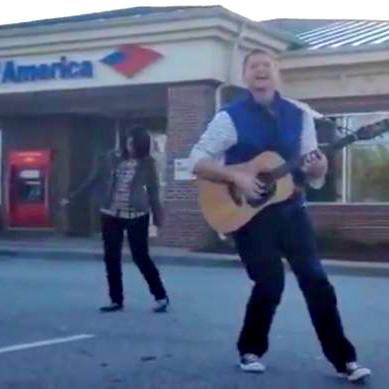 Ken and Meredith Williams, like many Americans, applied for a mortgage and have experienced nothing but feet dragging on the part of their bank, but rather than get frustrated by the endless pushing back of closing dates and giving up, the couple has taken to the internet, launching a social media campaign to pressure the bank to close their loan.

The Georgia couple created a video that went viral, proclaiming an impeccable score and a message to Bank of America, “Don’t let anybody tell you you’re too big to fail/Cause you belong in jail.” According to AOL, the video corresponded with a blog and requests for people to tweet about their plight – all they wanted was to make a substantial down payment in cash and use their nearly perfect credit score to obtain a $203,000 mortgage that was originally set to close on October 31st.

The couple publicly lamented that the bank refused to give them answers as to why the loan was continually delayed and expressed frustration at the $50 per day they were paying to the sellers of the home for the delay.

On December 16th, Bank of America responded to the viral video by closing the loan and agreeing to pay all of the late fees charged by the seller. “The Williams’ loan closed December 16. We apologize for the delay in closing, and for the inconvenience, we provided a credit at closing,” Bank of America said in a statement.

In this article:bank of america, News, Real Estate