According to a new study just released by real estate media company, Trulia, Chief Economist, Dr. Jed Kolko predicts that consumer confidence will remain low and voters will be frustrated in the 2012 election cycle as they witness more talk than action leading up to November. Consumers currently believe jobs are the number one priority followed by the economy and housing.

Kolko notes that five years of crisis have hardened Americans and they will only believe in change when they see it, given that so many drive by endlessly vacant homes and perpetual for sale signs every day in their neighborhood, likening vacancies to second hand smoke that cannot be ignored by those nearby.

The unified sentiment among Republicans and Democrats is that the government is not the answer, and that the priority should be keeping current homeowners in their homes, not necessarily creating a new buyer pool or going back to the era of easy credit. Kolko said, “voters are not looking to roll back the clock to boon times.”

Most believe that housing will hurt Obama’s chances in 2012 as few are confident in Obama’s ability to stabilize housing, although Kolko opined that the loss of faith may be unfair, as he believes the real estate market has stopped hemorrhaging, pointing to improved inventories, delinquency levels, and housing prices. Government programs like HARP extend help, but do little to help underwater borrowers recover, rather puts more money in homeowners’ pockets which causes a mini-stimulus, not a housing recovery. Americans doubt Washington can fix housing.

Employment levels to improve in 2012?

Trulia predicts that employment levels will improve in 2012 unless an economic crisis sets it back. Kolko says there will be fewer defaults and more buyer demand, also noting that mortgage rates are likely to increase and that the FHFA will likely announce their program to rent out their vacant inventory. There is likely to be no major policy breakthrough as housing is simply not in a deep enough crisis to force political opponents together in an election year.

In line with other economists, Kolko predicts rents will continue to rise and that all real estate will remain local, noting the hot spots to watch will be Texas, New England, Silicon Valley and that areas like Akron, OH and Rochester, NY will return to normalcy. Overall, he notes that it will be several years before the real estate market goes back to what was once known as normal.

Kolko told AGBeat that in 2012, he is hopeful that there will be a resolution to the robosigning scandal and rampant mortgage fraud that the 50 attorneys generals and various federal agencies investigated in 2010 but came to no unified conclusion as to how to enforce legal action against illegal foreclosures perpetrated by banks. “We are likely to see very soon what agreements the attorneys generals will have,” he said, noting that the sooner this happens, the better it is as our nation is suffering from a robosigning hangover.

The down side to resolution of the robosigning debacle is that the natural foreclosures that have been in limbo and not evicted will likely hit the market, causing a spike in foreclosures in 2012 which although it will hurt consumer confidence, Kolko says the move is necessary.

Trulia surveyed 2,028 Americans over the age of 18 through Harris Interactive. Click any screen shot below to enlarge: 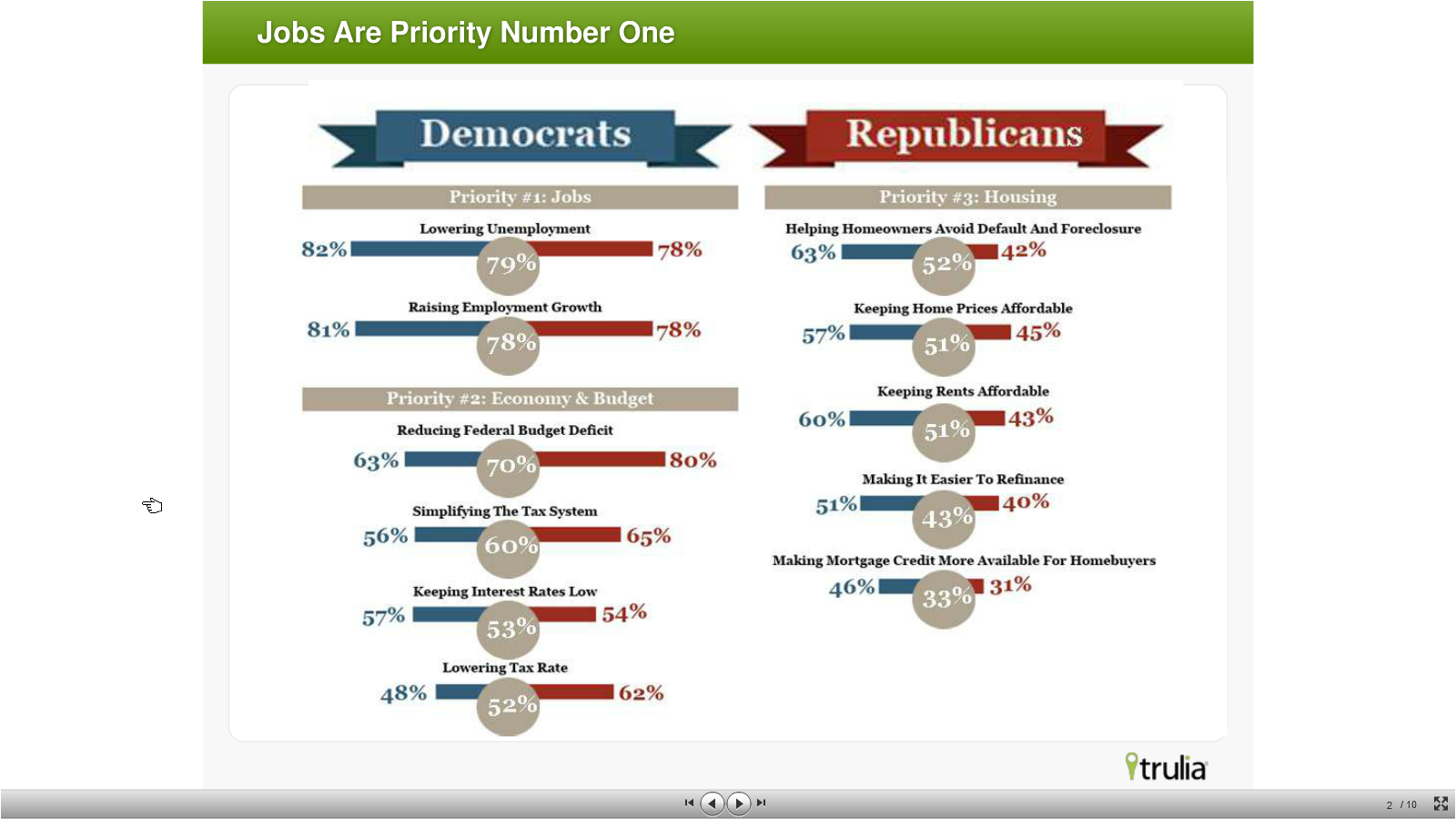 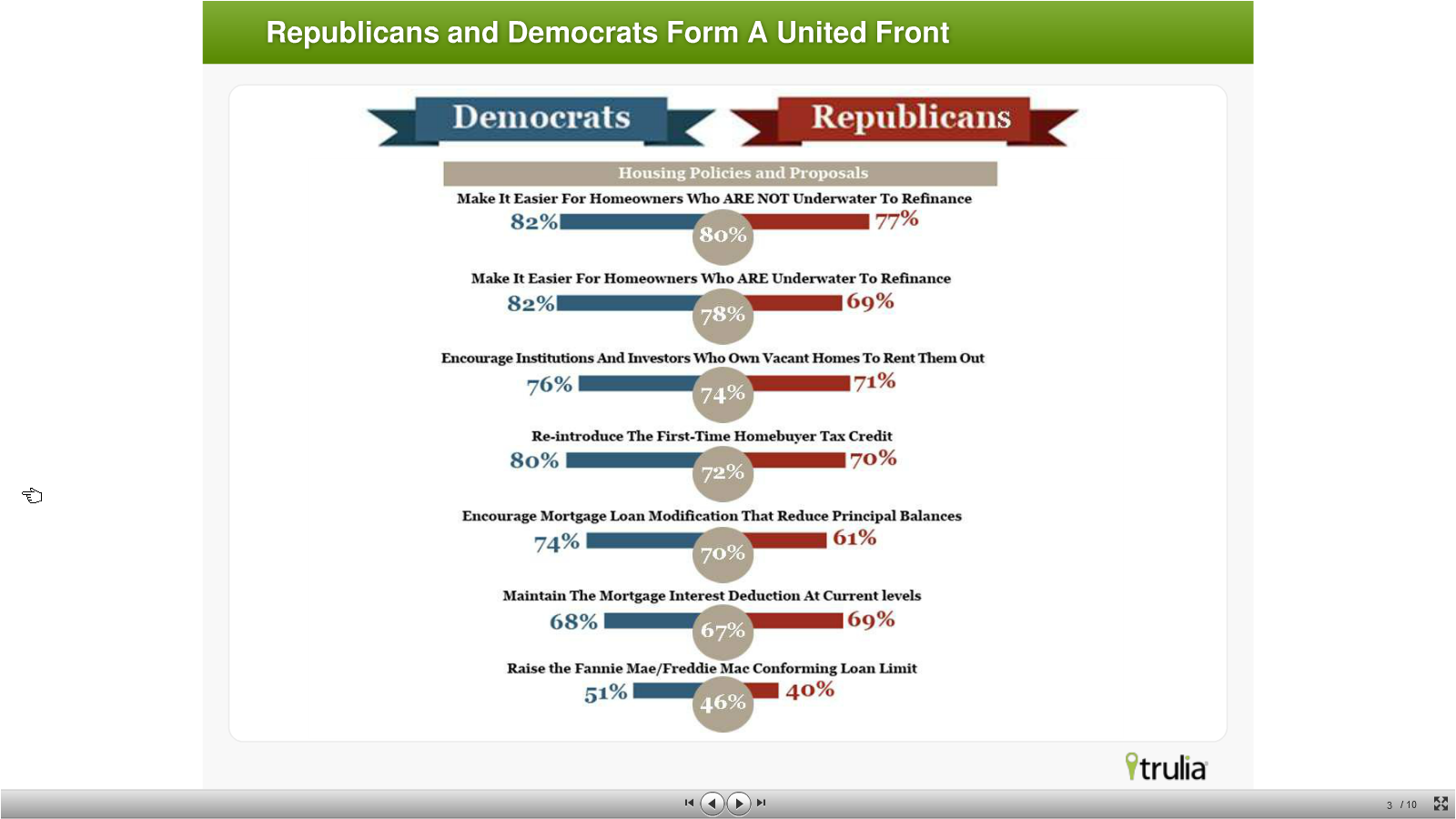 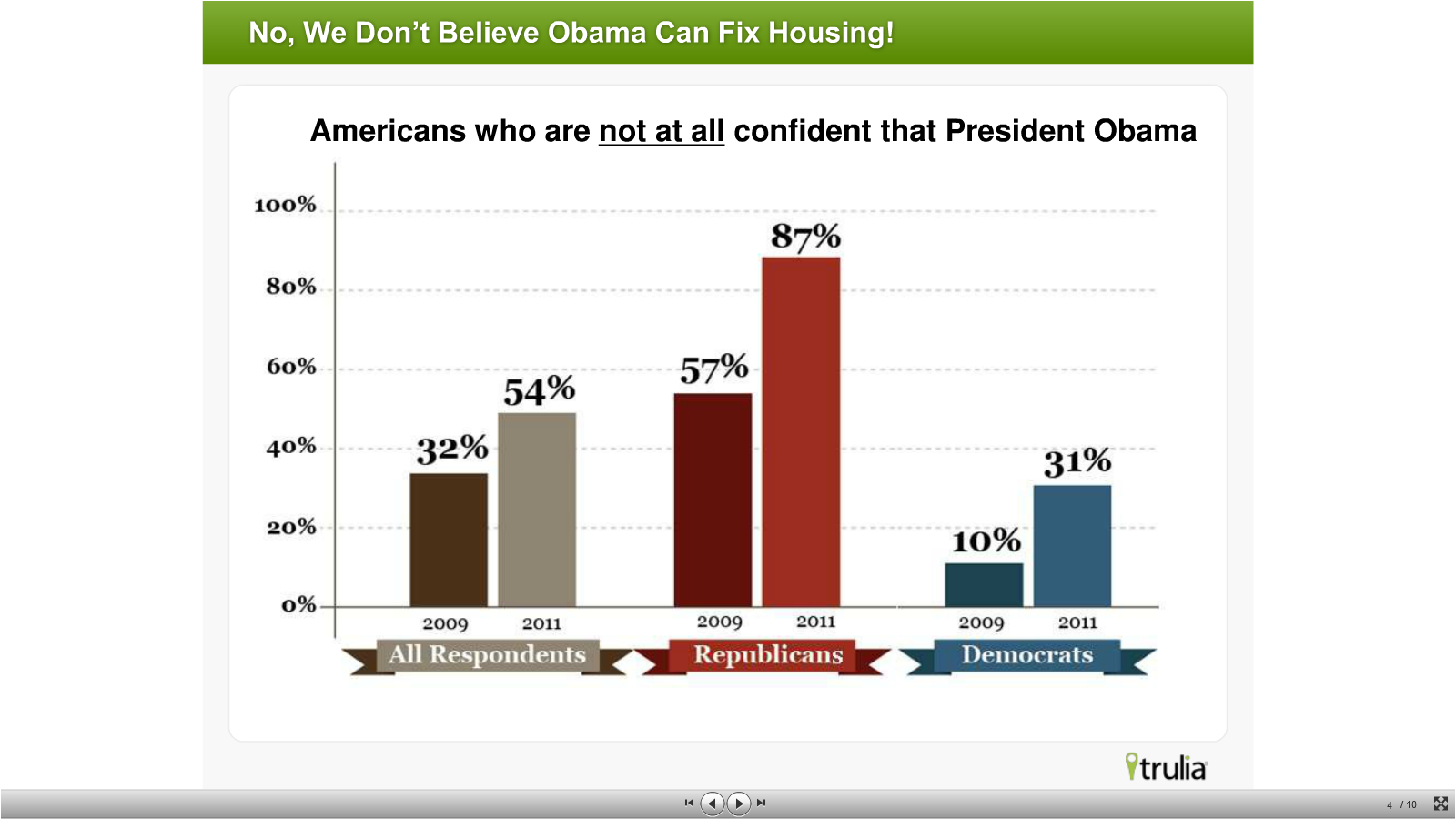 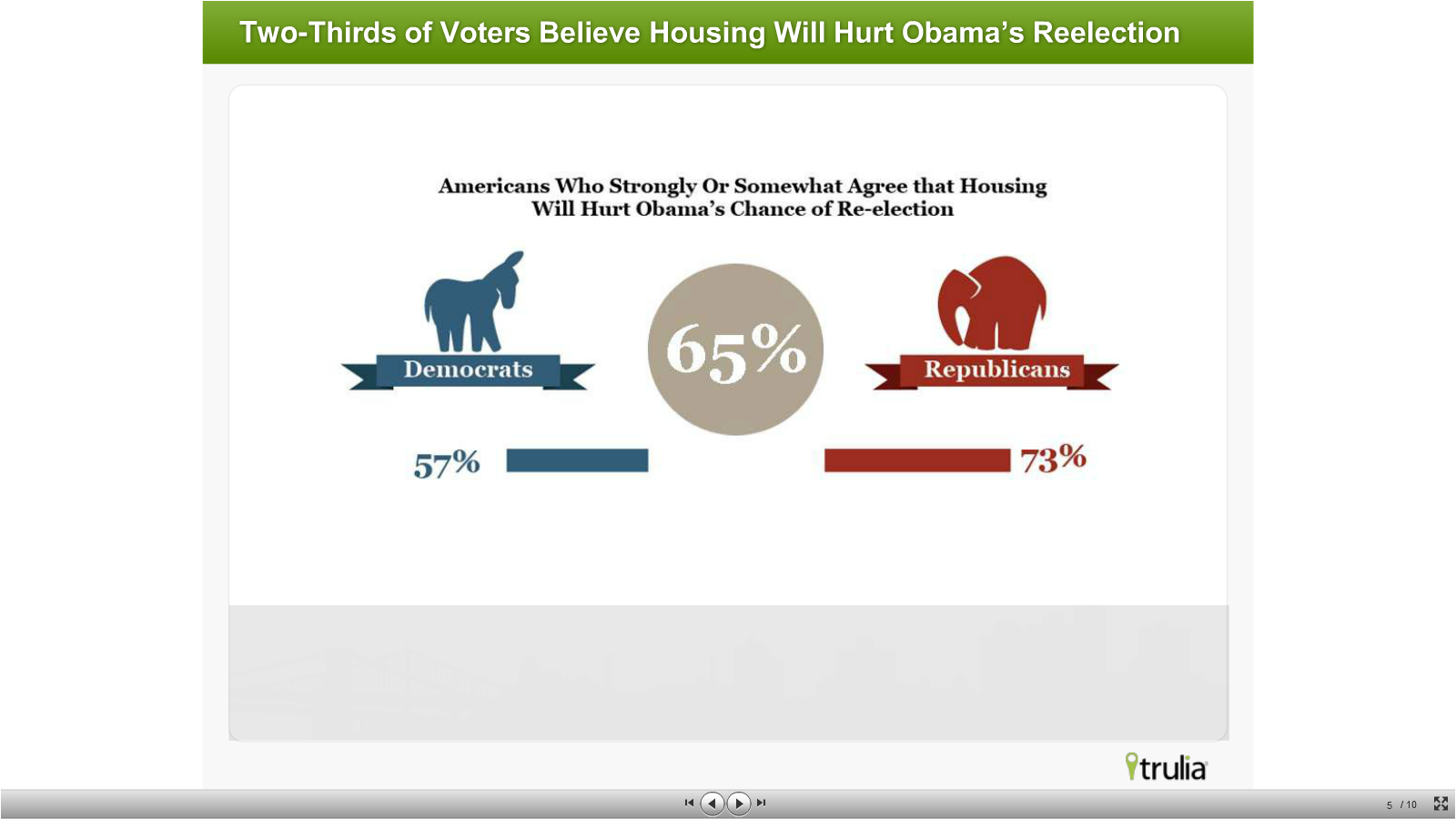 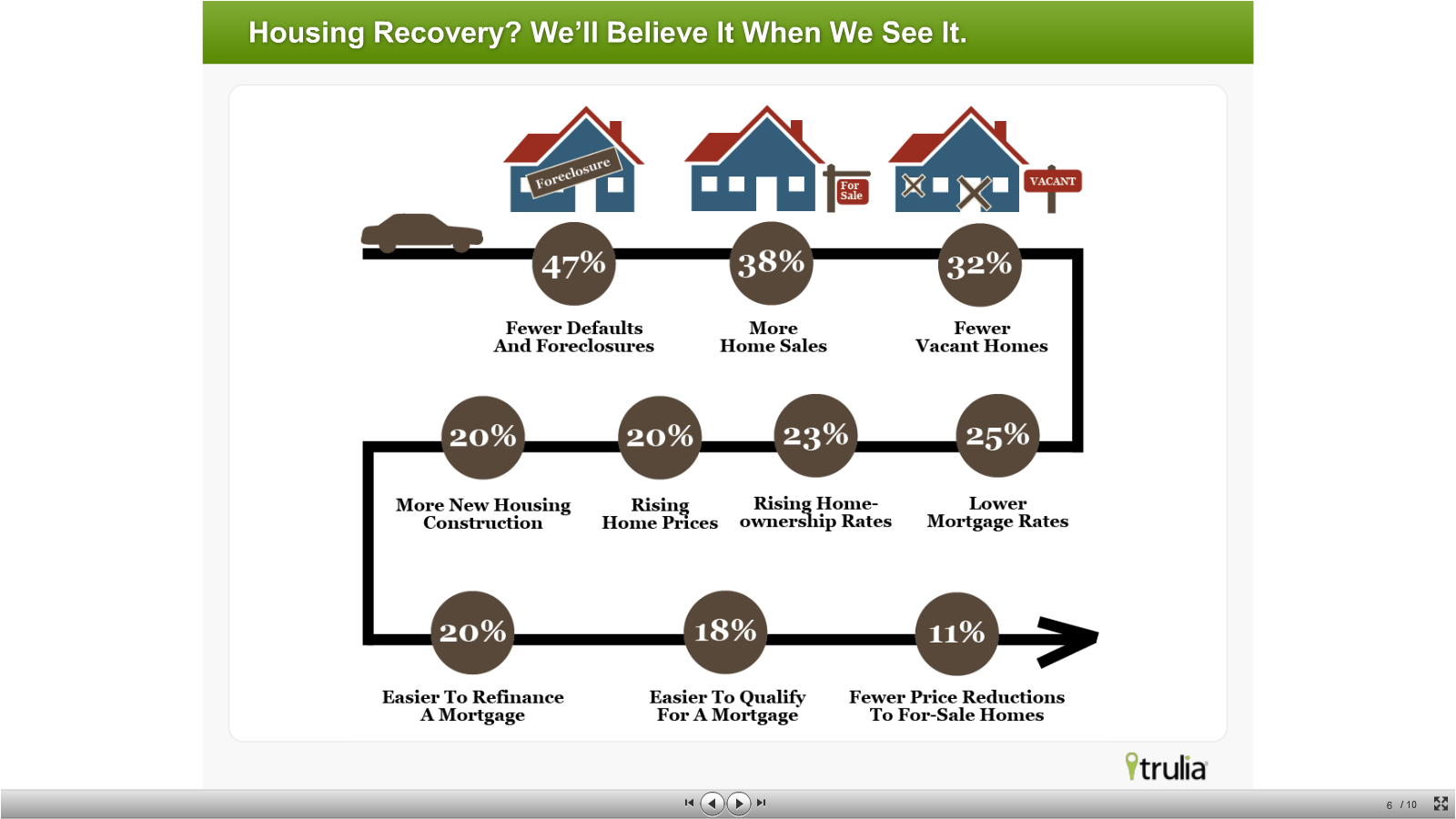