Home values up for the year, down for the month

According to the August Zillow Real Estate Market Report, home values fell 0.1 percent in August to a “Zillow® Home Value Index” of $152,1000, marking the indicator’s first drop in nine months, however, has increased 1.7 percent from August 2011. Zillow is also reporting that rents continue to rise, up 0.2 percent in August from July.

Major markets that saw home values edge downward from July to August after experiencing prior increases included the Chicago (-0.7 percent), New York (-0.3 percent) and Boston (-0.2 percent) metros. Home values continued to climb in the Phoenix (1.6 percent) and Miami-Ft. Lauderdale (1 percent) metros, although the rate of increase was smaller in August.

Rents, on the other hand, rose predictably, increasing 0.2 percent for the month, and 5.9 percent for the year to a national Zillow Rent Index of $1,280, with rents rising in seven of the past 12 months. Rents rose by double-digit percentages year-over-year in the Chicago metro (12.8 percent), the Baltimore metro (12.4 percent) and the Philadelphia metro (10.5 percent).

“Shouldn’t be cause for alarm”

“Home values took a small hit in August, but this shouldn’t be cause for alarm,” said Zillow Chief Economist Dr. Stan Humphries. “The back half of the year is always softer than the front half, and this year is no exception. We’ve been encouraging folks to focus on the longer term trends and not monthly blips. Home values will rise a little and fall a little, month by month, in the near future, but we believe the overall trend will remain positive albeit still below normal rates of appreciation.” 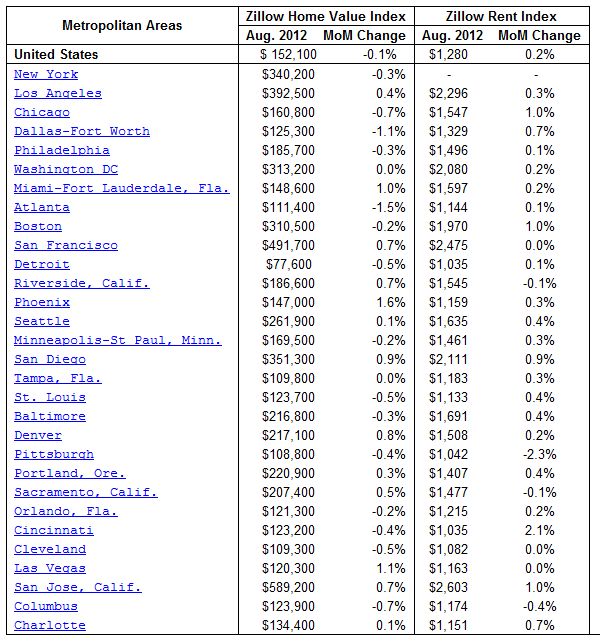