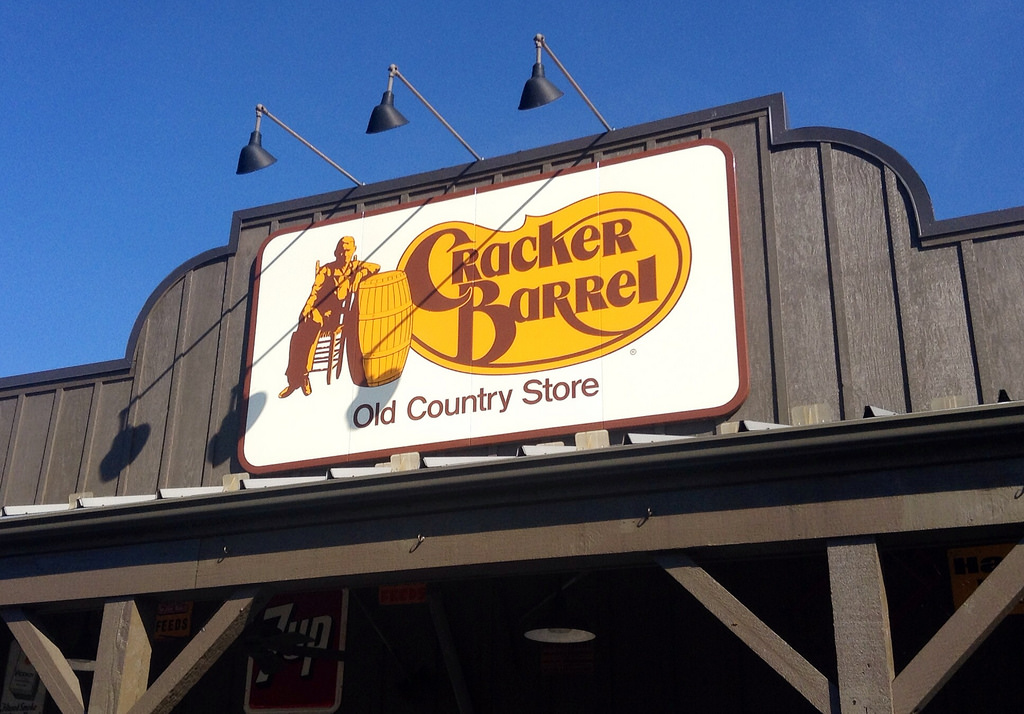 Crack in the barrel

It’s been an eventful week for Cracker Barrel so far. The Tennessee-based chain of family/country-style restaurants has found itself in the midst of not one, but two, trending hashtags on Twitter, #Justiceforbradswife and #Bradswifematters, and have seen their Wikipedia page altered multiple times over the past three days as well.

The TL;DR of it is this: Bradley Byrd of Milltown, Indiana, thrust the company into the trolling spotlight on March 4th by posting a simple question to the Cracker Barrel corporate Facebook page:

“Why did you fire my wife?”

Brad’s wife, Nanette, had apparently worked for the local Cracker Barrel for the past 11 years as a server, and was, to the best of Brad’s knowledge, terminated for lack of cause.

Rubbing salt into the wound

That she was fired on Brad’s birthday, and fired two weeks before earning vacation pay for this year.

What was posed as a question from an upset spouse has since taken a life of its own.

It gained a much wider audience when shared by comedian Amri King on Facebook this week.

Note from the Editor: if you want to spend a few hours digging into the many hilarious forms the topic took, click around here (warning: most of it is totally unsafe for work or around children).

Not only do more people know about Brad’s wife being fired, but they’ve taken to trolling the Cracker Barrel Facebook page and Twitter feed, with thousands of comments being linked back to Brad’s wife, no matter the tenuousness of the thread connecting their comment to the original post.

There’s also been a petition started at Change.org to get Nanette justice, with nearly 9,000 signatures to date.

The range of feedback that Cracker Barrel is receiving spans the gamut from nearly nonsensical to rather witty and droll. But driving the continuation of the onslaught is their reticence; as of the time of writing, Cracker Barrel hadn’t yet responded to either the flood of negative public opinion or to Brad’s original question.

And that’s the smartest move that they’ll make.

The Sound of Silence

It’s so very tempting when your company, brand, or person is being dragged through the public arena, (for right or wrong) to comment back and defend yourself with the same vigor that you’re being attacked by.

That temptation, however, has real consequences if given in to.

In a termination case, you may find yourself in a similar situation.

A beloved employee has done a “VBBT”: a very big, bad thing, and has to be let go. Or, perhaps, it was an employee popular with both internal and external customers, but, while they were nice and good for morale, their job performance had been lacking over time, and you’d worked with them to try to correct it, unbeknownst to the public.

Either way, you should steel yourself for impact.

In the world of digital presence, it’s going to be relentless. And personal. And, usually, mostly wrong on all of the details. It may certainly hurt, and your bottom line may take a brief hit, but remember: you don’t get to comment back on things like this.

Your role is to stay above the fray and remain professional

You made the decision to terminate, and before you did, you did your research as to why it was the right time to terminate the employee (Shame on you if you didn’t—in that case, your problems with an Internet backlash are both deserved and the least of things you ought to be worrying about).

Now it’s time to keep the course and focus on moving forward.

By responding to these comments, you don’t appear to be in control. Making no statement is more useful at times that making a statement that compromises you, be that legally in an employment context, or in the marketplace by mis-stepping and giving the trolls something real to write about.

If a response to media inquiry or public opinion does become unavoidable, a well-scripted response that is vetted by counsel in advance of releasing it to ensure that you haven’t inadvertently given rise to a defamation or unlawful termination suit, is your best friend.

Make it once in outlets that are responsive, and then let it stay.

An Audience of One

The only person that Cracker Barrel owes an answer to about why Nanette was fired is Nanette. The world at large certainly doesn’t need to know, and, neither does Brad, frankly.

If the employee doesn’t know why they’re being terminated, and provided something in writing to that effect, then that’s an area to address.

Everyone deserves to have clarity in the workplace, especially about something so critical as employee performance feedback leading to termination. Having the cause of termination in writing will also help you to defend against any “re-telling” of the termination story by the employee after the fact.

Also, remember that you have an audience of just one when it comes to discussing the details about those who have been fired: the terminated employee.

Just because it’s a spouse asking the question of why their partner was terminated, that doesn’t give them any additional standing to have that information shared with them by the company.

You Signed Up For This

You’re looking to the long view for your company and brand.

Making a hard decision that is the right thing to do and is evidence-supported isn’t always easy and it certainly isn’t always popular. But it’s the job that you’ve got to do.
[clickToTweet tweet=”You probably have crisis plans in place. Make one for social media too.” quote=”You likely have crisis plans in place about what will happen if you have a challenge to critical infrastructure, supply chain, or safety issues.”]

In a hyper-present media environment, in which the next meme is lurking around the corner, it’s a good idea to extend that planning to include a media crisis so that when the spotlight is turned onto you, you’ve prepared for it and made certain that you’re putting your best foot forward, by not getting it stuck in your mouth.

In this article:Brads wife, Cracker Barrel, The News