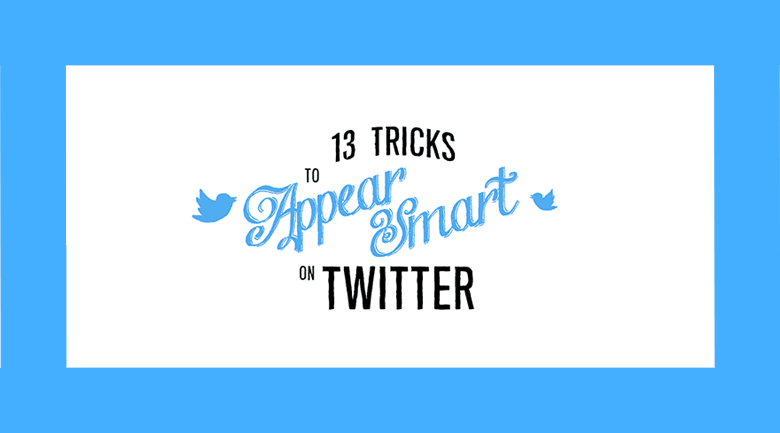 Social media is one of the most important tools for anyone looking to advertise, promote, or otherwise cultivate an online presence. Professionalism, discretion, and proper etiquette on the internet, however, are relatively new skills. As such, it is common to see companies falling into poor Twitter or Facebook habits, leaving them vulnerable to criticism.

The Cooper Review’s “13 Tricks to Appear Smart on Twitter” (depicted below) highlights some common mistakes in what may possibly be the snarkiest rebuke this side of The Onion. Sarcastically lauding social media faux pas as acceptable behavior, the article mainly focuses on pretentious, narcissistic, or self-promoting habits that tend to take away from one’s credibility.

Read also: How to use your profile picture to trick people into thinking you’re influential

The old adage “less is more” is quite applicable when it comes to social media expression—especially regarding bios and self-descriptions. Nobody wants to read a laundry list of achievements; simply put, if they’re worth noting, rest assured that they have been noted—or will be fairly presently—without plastering them all over cyberspace. Likewise, it is unbecoming to flatter oneself in one’s description box on any level. Companies and their associates are falling in love with social media (in fact, they’re becoming—dare I say it?—positively twitterpated) for its punchy, direct form of communication; keep that in mind when you are tempted to lavishly expound upon your own personal achievements, your mother’s health, and your pet’s new diet.

Poking fun at the worst of the worst

As a representative of a company, your own personal social media habits matter. Writing “my views in no way reflect those of my employer” is about as effective at dissuading critics as a water pistol is at killing a dinosaur; chances are high that, should your carelessly-chosen words reach the right (or wrong) set of eyes—regardless of your affiliation—they will reflect poorly upon those who chose to employ you. Careers have been made and broken with a few simple verbs, nouns, and adjectives in the wrong place at the wrong time, so keep it clean and remember the role you play in the well-oiled machine that is your employment.

For a medium that is so crucial to the success of any business, large or small, it is pertinent to remember to follow the social guidelines to which one would adhere in any face-to-face interaction. Brevity, modesty, and directness will always trump bragging and shameless self-promotion. G-rated interactions will always look professional, whereas anything transcending that will send potential customers, auditors, and twice-over parents scurrying for the metaphorical hills.