This year, Twitter’s top stories mostly revolved around unrest in the Middle East, the Japanese Earthquake and the shooting of Gabrielle Giffords while Facebook’s top stories (as seen below) were more heavily weighted toward celebrity news like the royal wedding, Charlie Sheen and Amy Winehouse.

Although Facebook has more users and is traditionally more influential, the trends of 2011 show Twitter as emerging as a communication tool, especially live during crises, while Facebook appears to be reactionary in nature, sharing information after the fact. Each has its place and publications have to understand where they fit in to each, as the culture of the two widens and refines itself over time. 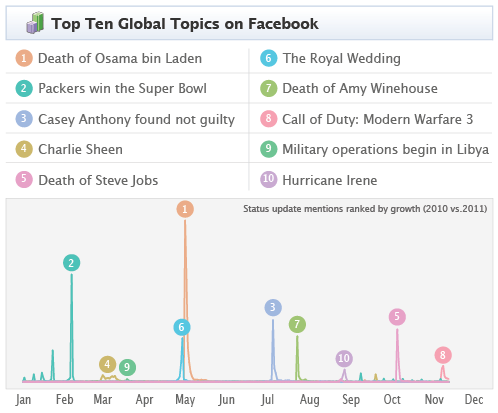 Top 10 stories shared on Facebook in America in 2011:
1. Satellite Photos of Japan, Before and After the Quake and Tsunami (New York Times)
2. What teachers really want to tell parents (CNN)
3. No, your zodiac sign hasn’t changed (CNN)
4. Parents, don’t dress your girls like tramps (CNN)
5. Father Daughter Dance Medley (Yahoo)
6. At funeral, dog mourns the death of Navy SEAL killed in Afghanistan(Yahoo)
7. You’ll freak when you see the new Facebook (CNN)
8. Dog in Japan stays by the side of ailing friend in the rubble (Yahoo)
9. Giant crocodile captured alive in Philippines (Yahoo)
10. New Zodiac Sign Dates: Ophiuchus The 13th Sign? (The Huffington Post)

In this article:facebook, social media news