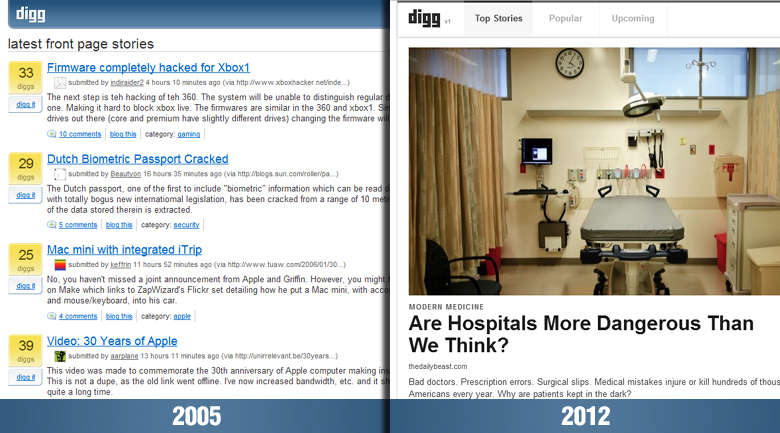 Are Digg’s glory years past?

2004-2008 were the glory years for Digg.com. During 2008, content creators were vying to get their material on to the site and hope that readers would take interest and boost it to the top, thereby increasing traffic for their company and their brand. But in 2010, the site’s popularity began to take a dive for several reasons. Competitors like Reddit came on the scene, people began to migrate to social media sites and the updates to Digg detracted from the user experience on the site rather than enhanced. But this year, Betaworks bought the site and re-launched it in the hopes of making it better than before.

The site places stories into a hierarchy of “top stories” followed by “popular” and “upcoming.” Top stories are ones that have been posted on to the site and received enough user Diggs and social media mentions to be displayed at the top of the page. Popular stories are ones that are receiving the most Diggs and mentions in the past 18 hours and each story is accompanied by a chart showing its peaks and valleys of popularity during that time. The more Facebook likes and tweets a story gets, the higher the story is presented in this section. Finally upcoming stories are ones that have just arrived on the site due to social media shares and mentions. In order to move up in rank, users Digg the stories they’re interested in and watch them move up the list.

What value does this have for professionals?

As far as Digg’s business value, it depends on the stories that users are voting to the popular and top sections. I see it more as a form of keeping tabs on what’s popular. There aren’t any search options on this site so readers are subject to whatever everyone else thinks is interesting and decides to post a link to. The world of news is becoming increasingly more segmented as people can place filters on what news they want to keep tabs on and glaze over the rest, so this is more of a community forum of news where the majority rules. If you like to come into the office and see what everyone is reading, there are a wide range of stories; one top story may be about how more students are opting out of college, while another is about recently popular Korean rapper Psy who is begging the El Monte mayor to re-hire 13 bodyguards that were fired for dancing in his Gangnam Style music video during their breaks.

Digg is a great source of content but can be a luck of the draw as far as providing business value. If you’d like to see a topic that you’re interested or a message you want to promote rise to the top, share it on your LinkedIn, Facebook and Twitter and get your friends to the same. If it’s popular enough, the industry news you feel is important just may make itself on to Digg’s home page and gain visibility amongst the high number of people that visit this website on a daily basis.