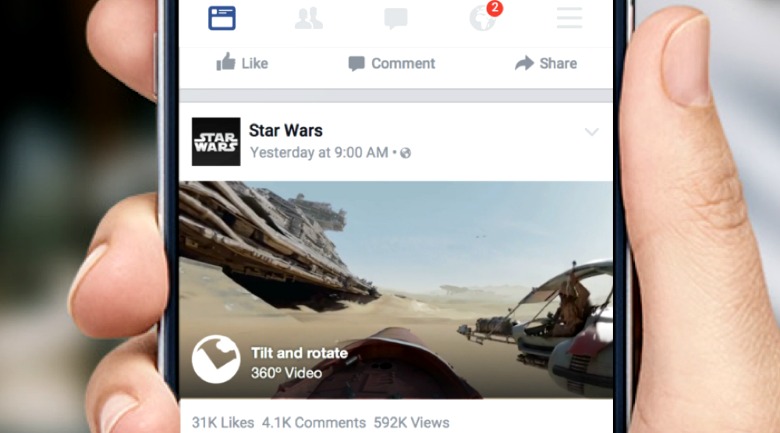 After launching 360 videos earlier this year, Facebook announced the launch of 360 photos, which rolls out today across multiple platforms. With this feature, users who take the right kind of photo (panorama phone pics, 360 photo apps, and special cameras) can convert their picturesque moments into a 360-degree viewing experience.

Who will be taking advantage?

Much like 360 video, publishers like NASA and the New York Times wait at the ready to use this feature.

From a visibility standpoint, this format helps brands stand out amongst the content clutter.

It also provides an innovative product preview experience for verticals in the business of a visual experience. Amongst others, TechCrunch names movie studios and tourist destinations as two destinations that could take advantage of this new technology. One of the first 360 video examples is this Star Wars video footage. One might surmise that real estate brokers and event planners could use this technology as well.

More importantly, this feature enables users to generate their own content in this arena. Not only will this expand this type of hyper-engaging content, but it enables Facebook to further its user-generated content capabilities. For a site like Facebook, where UGC stands it apart from other social media platforms, this is a necessary step. As a result, it should improve engagement amongst users.

So, how can you take advantage of this new media format and increase your Facebook fan engagement in the process?

Time for your brand to get on it

If you take professional photos, set your team up with 360-enabled cameras. According to Facebook’s guide, the following cameras will work with the new feature: Samsung Gear 360, Ricoh Theta S, 360Fly, Giroptic 360 Cam, and the ALLie Camera. Don’t use formal cameras? Smartphones like Apple’s iPhone and Samsung’s Galaxy work too.

Familiarize yourself and your marketing staff with the ins and outs of panoramic picture-taking. Make sure there’s something to see from every angle of the picture, so that users want to explore every angle of the 360 experience. Master the art, and you can establish your brand as a new media master!