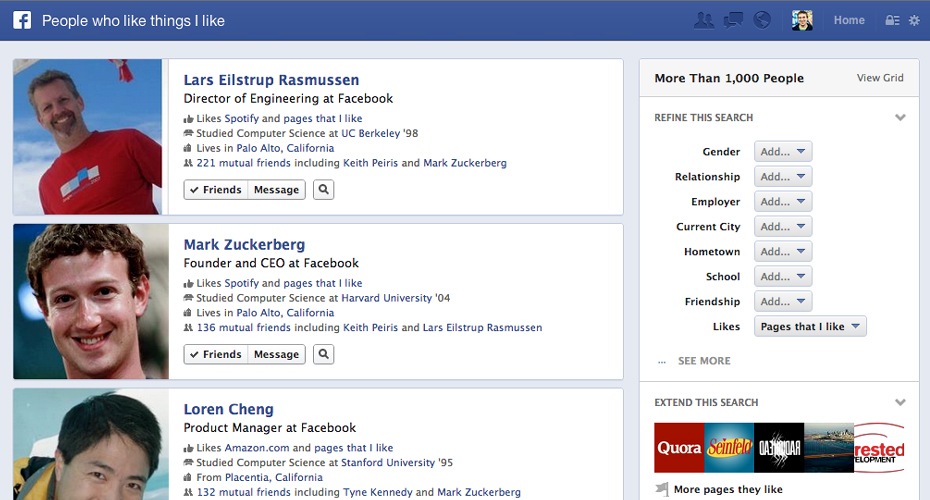 Facebook has long said it is working on search, having partnered with Bing years ago to add context, and recently sharing that they will be reinventing search. At an ongoing event today, Facebook CEO Mark Zuckerberg said the new “Graph Search” the company is launching in limited beta is “not web search,” rather states, “We are indexing our map of the graph, which is really big and constantly changing. Almost a million new people every day. 240 billion photos. 1 billion people. 1 trillion connections.”

“Friend connections, locations, likes, comments, tags, it all adds up to indexing all this content and making it so you can retrieve it instantaneously is a really hard technical problem,” Zuckerberg notes, but the new offering appears to be their first step in offering search for users.

As it rolls out, users will see a larger search bar atop the page, appearing like so, with suggested searches already included:

“Graph Search and web search are very different,” Facebook said in a statement released today. “Web search is designed to take a set of keywords (for example: ‘hip hop’) and provide the best possible results that match those keywords. With Graph Search you combine phrases (for example: ‘my friends in New York who like Jay-Z’) to get that set of people, places, photos or other content that’s been shared on Facebook. We believe they have very different uses.”

Click here for videos about Graph Search and a message from Zuckerberg himself.

While they say they aren’t doing web search yet, their partnership with Bing is likely working diligently in the background to erode Google’s marketshare as their social network remains significantly larger and more active than Google+, leaving Google vulnerable in the social search category. It’s not exactly a threat to Google, however, as the company appears to be promoting it as a way to connect more deeply with existing connections.

Graph Search is currently in limited beta, as Zuckerberg calls the project in “very early development,” as it is only available in one language (English), and posts as well as open graph actions are not available yet, but the company says they will be working on this to be released possibly within the calendar year. The current focus is on people, photos, places, and interests, and is a very basic start to what could change the social search scene as they later roll the feature out to all users, including mobile users.

The future of social search: supersize your business

For now, users have to sign up to join the wait list for Facebook’s Graph Search and will be notified when they’re included in the beta. In it’s current form, the focus is on personal connections. But what about the future? What does this mean for social search?

With the addition of two features, Graph Search could make a tremendous impact on professional life, doing more than taking on Google, but taking a shot at LinkedIn by adding relevance to people search, particularly when connecting with fellow professionals. These two features include the possibility of being able to search people you’re not yet connected with, and the ability to search within Pages.

Having already stated they will be tackling status updates in the future, sources tell AGBeat that they believe Facebook will ultimately make connections within Facebook Pages searchable, as well as Facebook Page status updates both current and past. Combine that capability with the ability to search non-connections, and you’ve added massive value to the average professional’s life at no cost to them, opening new ad revenue streams for Facebook.