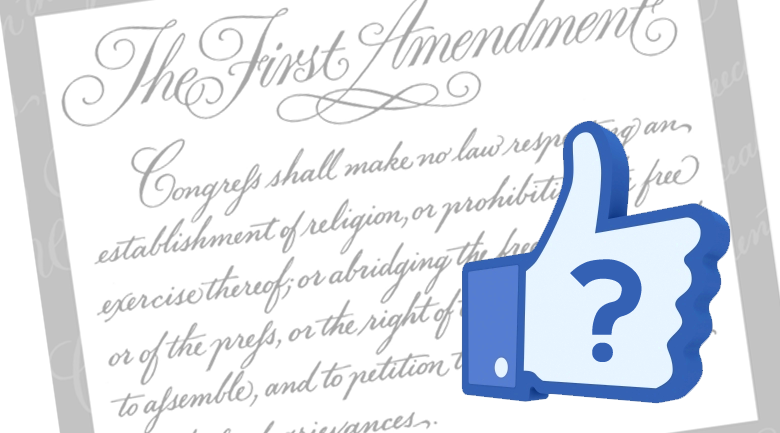 Free speech in America, circa 2012

The First Amendment has a long tradition of protecting our free speech in the United States, but recent legal battles have many people questioning whether the medium of a message changes a user’s rights, and whether or not free speech laws apply. In April, a U.S. District Judge ruled that the First Amendment does not apply to your Facebook ‘Likes’ which came up in a case in Virginia wherein the Sheriff was running for reelection in 2009, and Daniel Ray Carter, one of his six employees “liked” his opponent.

The Sheriff fired Carter and the other five after the election, and they filed a lawsuit which was thrown out by the judge who ruled the “like” is not protected by the First Amendment.

Facebook and the American Civil Liberties Union (ACLU) are now involved, having just independently appealed the judge’s ruling. In a statement from the ACLU, they state that “Whether someone presses a ‘Like’ button to express those thoughts or presses the buttons on a keyboard to write out those words, the end result is the same: one is telling the world about one’s personal beliefs, interests, and opinions. That is exactly what the First Amendment protects, however that information is conveyed.”

ACLU attorney Aden Fine said, “The Supreme Court has made clear that the First Amendment protects everyone’s right to express their thoughts and opinions in whatever form they choose to do so, whether it’s speaking on a street corner, holding up a sign, or pressing a button on Facebook to say that you ‘Like’ something.”

Court documents reveal that Facebook argues that “Liking a Facebook page is entitled to full First Amendment protection. The district court reached a contrary conclusion based on an apparent misunderstanding of the way Facebook works; the resulting decision clashes with decades of precedent and bedrock First Amendment principles.”

Additionally, Facebook argues, “If Carter had stood on a street corner and announced, ‘I like Jim Adams for Hampton sheriff,’ there would be no dispute that his statement was constitutionally protected speech.”

Next steps in the free speech battle

This battle is nowhere near over, as it remains unseen whether or not the appeal will move forward or not. This judge’s ruling and other judges’ rulings that are similar are from a place of ignorance, just as Facebook expressed.

It is concerning, because the uncertainty surrounding First Amendment rights as they pertain to social media are not well understood by the courts, as they somehow see a “Like” as different than saying something with your mouth (which is protected speech).