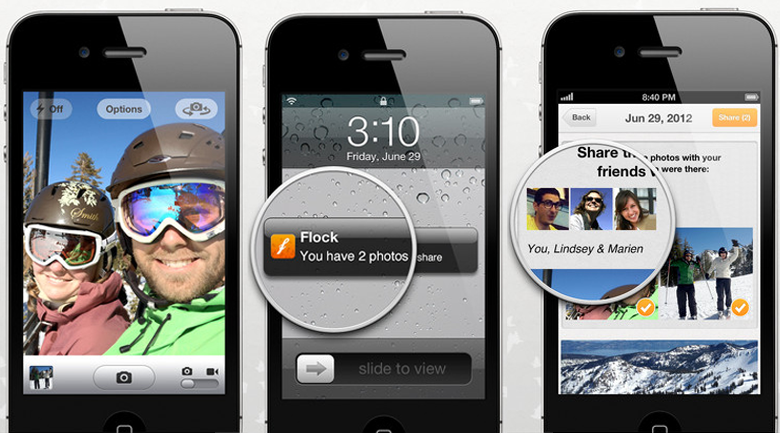 Bump recently released an app that allows you to wirelessly bump your photos from your smartphone to your computer, and has now released a new app called Flock, which finds all photos you take together with friends or family and brings them from each person’s phone together into a single album.

Photo sharing apps have long existed, but with Flock, there are no extra steps or reminders or hassles to pull all of the photos together, which is particularly helpful in the situation where people are taking group photos with every single person’s camera or phone.

How it works: take photos just like you normally do with any camera app, and the app automatically knows based on your location, who of your friends that are also using Flock, and pulls all of your pictures together into one album as you opt in. This avoids any random strangers being added to the album, and it saves the step of asking everyone to share pictures when they get home.

The company says, “You don’t have to remember to use Flock. Just do your thing, and Flock sends you a notification afterwards if you have photos to share or view. Flock even works backwards in time to create albums from before you installed the app! Install Flock with family and friends and immediately uncover lost memories stuck on their phones.”

Flock uses GPS to locate friends nearby, and the team says the app is still mindful of battery life. In addition to GPS, Flock relies on Facebook to learn who your “real” friends and family are, and you have control over your privacy settings, and Flock says it will never post anything without your approval.

Flock looks great for happy hours, team outings, company events, markets, and anything memorable involving groups of people – be the one in your group to bring up Flock to the other iOS users so you can all save the step of photo swapping.