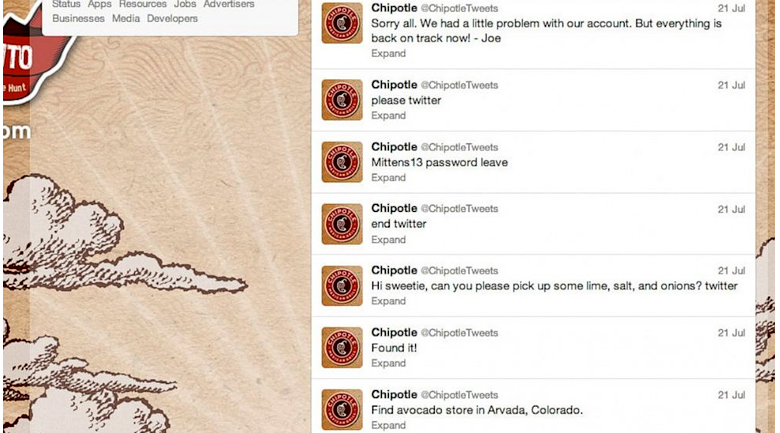 When AG Beat’s Marc Lefton satirically wrote that hacking your own social media account was a “new trend,” I bet he never dreamed he would be right. Apparently he has become a fortune teller of sorts, because Chipotle is not the first company to hack its own account as a publicity stunt.

An attempt to get people talking

Chipotle stated, “We thought that people would pay attention, that it would cut through people’s attention and make them talk, and it did that… we didn’t want it to be harmful or hateful or controversial.” But, I am not sure this is the case. It has created a stir because people could see through their stunt, for the most part.

Lefton’s light-hearted comment, “Will the social hacker be the next social media guru? Perhaps there will be a new analytics platform that tracks pre- and post-hack activity. ‘Well Donna, our core audience seems to have shifted in the last day from 45 year old soccer moms to 14 year old teen boys, perhaps we should change the style of purses we’re manufacturing,’” actually has an air of truth to it now. Businesses seem to be pandering to the attention-grabbing methods used by juveniles who hack Twitter accounts merely for the thrill of posting the message: “You’ve been hacked.”

So was this effective or innovative?

He also writes, “When a brand is hacked and it’s this obvious, the damage is really minimal. It’s no more damaging than if a bunch of rowdy teenagers kidnapped Burger King employees, stole their uniforms and instigated a massive food fight inside the restaurant. People would just feel bad for the victims. It’s merely juvenile vandalism when there’s an opportunity for activism.” And perhaps this is the point: if you are going to go to all the trouble to hack, or appear to have hacked, a Twitter account, make it worth your while. Do something interesting. Post coupons, thank random followers, or at the very least avoid the extreme juvenile behavior of posting things like, “twitter. Twitter. Do I have a tweet?” As Chipotle did.

Perhaps we should stick with the serious notion of: customer engagements equal trustworthiness, and exploiting this is just not a good idea. Posting random tweets just to get attention does not make a good social media campaign and is no where near creative or innovative.