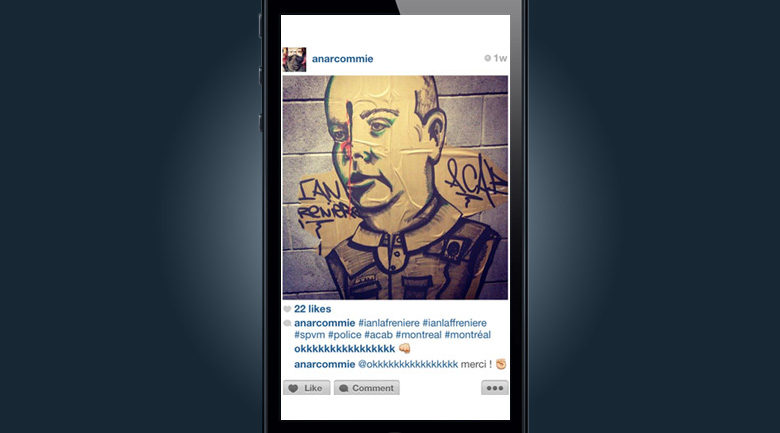 Last week, Canadian artist Jennifer Pawluck was arrested in Quebec for taking an Instagram photo of street art, sharing it on her personal account, according to Hyperallergic.com.

The street art, depicted above, is of Montreal police spokesman Ian Lafrenière with a bullet wound in his forehead and the tag “ACAB” which is said to be a common graffiti acronym which stands for “all coppers are bastards.”

Pawluck used the hashtags #ianlafreire #police #acab #montreal and others, which in conjunction with the photo led to the Montreal police issuing an arrest warrant for what they way was a threat to Lafrenière.

Montreal police charged Pawluck with intent to harass, and a spokesman for the police department told La Presse in French that, “What I can say is that a person has been arrested this morning in connection with threats on the internet. This person was met by investigators.”

Pawluck calls the incident “ridiculous,” and goes to court on April 17th. She cannot go within 1,000 yards of police headquarters or the police spokesman’s home, and despite the trouble, Pawluck has not deleted the photo from her Instagram account.

From an American perspective, it is strange to think that taking a snapshot of a street artist’s work constitutes a threat, particularly when the caption did not appear to contain any direct threat, rather labels about the image Pawluck did not herself create.

While it is conceivable that images taken in other countries could go against their laws as freedoms don’t flow quite so freely in some nations, it would be shocking if an arrest like this went down in America. But could there be situations here that constitute a threat? Taking a photo of street art is one thing, but directly offering a threat is another.